Old materials in a new design 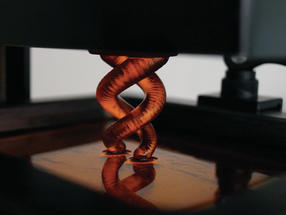 3D printing of a double helix made of liquid acrylic resin, which cures under the light on a building platform.

Plastic could soon be saying goodbye to its bad reputation. A working group headed by Professor Rolf Mülhaupt at the Freiburg Materialforschungszentrum (FMF) is currently developing “single-polymer composites” that can be produced from both fossil and renewable raw materials and later recycled without residues.  At the same time, researchers at the FMF are working on the production of new materials from waste products such as orange peels and waste paper that could be used for 3D printing. The Freiburg researchers will be presenting their new materials at the K trade fair, which takes place in Düsseldorf from 16 to 23 October 2019.

The special feature of these single-polymer composites is that they are based on hydrocarbon materials that reinforce themselves without the addition of other substances and are characterized by high strength, rigidity and impact resistance.  “They can be used as a source of raw materials and energy and are also suitable for 3D printing,” says Timo Hees. His colleague Carl Schirmeister adds: “In the future, single-polymer compositescould be useful in sustainable lightweight construction, in the manufacture of orthopedic aids, and in plastic gears.”

In the lab almost next door, Anne Asmacher and Benjamin Stolz are also making materials suitable for 3D printing from waste products such as waste paper and orange peel. The chemically untreated waste paper is first pulverized and starch is added to create a paste that 3D printers can process. “By mineralizing the material with a silicate, the mechanical properties can be reinforced and the resistance to moisture and flame retardancy increased,” says Benjamin Stolz. Due to its exceptionally low density, the material is particularly suitable for use in lightweight construction. The weight savings could, for example, save fuel in the transport sector or in the aviation and automotive industries; this would have a positive effect on sustainability alongside the utilization of a waste product.

In addition, the researchers have used limonene, a substance obtained from orange peels, to produce compounds with a low viscosity. “The advantage of this is that they gain further rigidity and temperature stability and are therefore suitable for additive tooling such as injection molds,” says Anne Asmacher