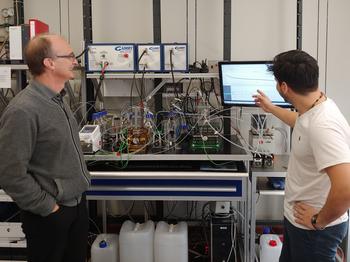 By 2050, the chemical industry should operate in a climate neutral fashion, which means phasing-out fossil oil, gas and coal. Therefore alternative carbon sources and renewable energy have to be utilized in order to replace fossil reserves. A new Stuttgart Research Initiative will elaborate on the concept of such a future chemical factory, both from a fundamental and application-oriented standpoint. The University of Stuttgart, German Aerospace Center (DLR), the Center for Solar Energy and Hydrogen Research Baden-Württemberg (ZSW) and the Fraunhofer Institute for Interfacial Engineering and Biotechnology (IGB) will be involved in the initiative.

According to the Climate Action Plan 2030, as enacted by the Climate Cabinet of the German government, all sectors – including the chemical industry – must cut their greenhouse gas emissions to 55 % of their 1990 level. Despite significant increase of the process efficiency by the chemical industry in past decades, the long-term goal of the Climate Action Plan 2050 to become largely greenhouse-gas neutral by 2050 is only possible through new disruptive technologies and processes.

Especially when considering the fossil¬based raw materials used in chemical production, the goal must be to close the carbon cycle by moving to non-fossil based raw materials. In addition to the implementation of chemical recycling and the bioeconomy, the use of the ubiquitous non-fossil resources carbon dioxide (CO2) and water (H2O) can help closing the carbon cycle and the use of oxygen (O2) and nitrogen (N2) can further pave the way to higher-value products. However, activation and conversion of these stable molecules requires energy that must originate from renewable sources such as wind and solar. For economic profitability, processes yielding higher-value speciality chemicals with high selectivity are required.

The concept of the new Stuttgart Research Initiative is based on the use of electricity from renewable sources, such as wind and solar, to activate the aforementioned ubiquitous non-fossil raw materials CO2, H2O, O2, and N2. The research initiative focuses on three electrical production technologies: Plasma Technology, Electrolytic Processes and Electrically Heated Reactors.

At the University of Stuttgart and the associated non-university research institutes, ten projects are currently underway with the goal of chemical production using electricity, which will now be packaged and extended. The spokesman of this Stuttgart Research Initiative is Prof. Elias Klemm, Director of the Institute of Chemical Technology at the University of Stuttgart. Together with the DLR Institute of Engineering Thermodynamics, research has already been conducted on the so-called CO2,H2O-coelectrolysis since 2009. The ZSW has yearslong experience in the field of direct air capture of CO2 and the conversion of green electricity into hydrogen and methane. Plasma Technologies and their applications will be investigated at the University Institute for Interfacial Process Engineering and Plasma Technology, the University Institute for Photovoltaics, and the Fraunhofer IGB. Direct electrical heating of chemical reactors will be developed by “MCI – The Entrepreneurial School” in close collaboration with CoorsTek company and the University of Stuttgart.