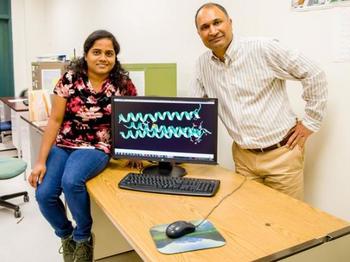 Enzymes are nature's powerhouses. Found in the cells of all animals, plants, and every other living organism, they accelerate the chemical reactions that trigger thousands of biological functions--from forming neurons to digesting food.

They perform their jobs so selectively and so quickly--millions of times faster than a blink of the eye--that the field of biomimetic chemistry has emerged over the past few decades with the goal of designing artificial enzymes that can mimic the powers of natural enzymes in industrial settings. Artificial enzymes could, for example, convert corn into ethanol or help create new drugs more quickly, cheaply, and effectively.

Moving one step closer to achieving that goal, Rajeev Prabhakar, a computational chemist at the University of Miami, and his collaborators at the University of Michigan have created a novel, synthetic, three-stranded molecule that functions just like a natural metalloenzyme, or an enzyme that contains metal ions.

"It wasn't clear that they could be made, but we made them. And, then we used them to successfully catalyze reactions," said Prabhakar, a professor of chemistry who studies enzyme reactions in hopes of designing their artificial analogues. "This is an incremental but important step in the development of artificial enzymes, which has long been considered chemistry's holy grail. Unfortunately, as good as natural enzymes work in our bodies and other life forms, they don't tolerate other settings very well. They're also very expensive and not easy to prepare and purify."

For their groundbreaking study published in Nature Chemistry, Prabhakar and graduate student Vindi M. Jayasinghe-Arachchige joined forces with Vincent L. Pecoraro, a University of Michigan chemistry professor, to improve the performance of the artificial enzymes Pecoraro's lab pioneered over the years. The Michigan researchers had previously created simpler synthetic metalloenzymes that successfully catalyzed a number of chemical reactions. But those artificial macromolecules were designed with three identical, or symmetrical "homotrimeric" strands, which, Prabhakar said, limited their catalytic abilities.

In the new molecule, which Jayasinghe-Arachchige designed on the University of Miami's supercomputer with Prabhakar's guidance, the third strand differs in structure from the other two strands. Her quantum mechanical calculations showed that the more complex, non-symmetrical, three-stranded structure, known as a "heterotrimeric" coil, expanded the catalytic performance of homotrimeric artificial metalloenzymes--a finding that Pecoraro and his team confirmed with experiments in his Michigan lab.

"Our techniques are different, but complimentary," Prabhakar said. "What we do the Pecoraro group cannot do, and what they do, we cannot do. We model molecules on the computer so we can predict their structural properties and the mechanism of their formations. They use our models to build the real thing, and in this case that is the first example of a natural heterotrimeric molecule."

Most lay people would probably find the study as incomprehensible as its title: "Heteromeric three-stranded coiled coils designed using a Pb(II)(Cys)3 template mediated strategy." But the bottom line, Prabhakar said, is that the collaborative research conducted in Miami and Michigan opens the door to a new strategy for achieving the creation of artificial enzymes that work as well as natural enzymes.

Now in her last year of study for her doctorate in chemistry, Jayasinghe-Arachchige said she remains fascinated by the advances in computational chemistry techniques that allowed her to model the chemical structures and reactions of the new molecule.

"I'm excited that our findings will create new avenues toward the development of efficient artificial enzymes that can be used to enhance the quality of life,'' said Jayasinghe-Arachchige, "and as a woman in a field where women are underrepresented, I hope this study will motivate women to join the fascinating world of STEM fields."