Taking the temperature of the periodic system 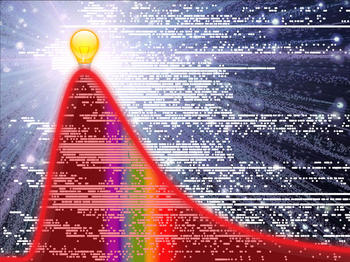 It took almost a century until the spectral lines, first discovered by William H. Wollaston and Joseph von Fraunhofer at the onset of the 19th century, were explained by Niels Bohr with his famous atomic model. Quantum mechanics then provided the tools to calculate the atomic spectral lines of the various elements exquisite accuracy. As of today, more than 250,000 of them have been experimentally verified and are listed in the comprehensive online catalogue maintained by the National Institute of Standards and Technology (NIST).

Playfully browsing this extensive database, a German team of scientists from the University of Rostock was quite astonished to discover an entirely unexpected regularity: Plotting the number of known lines over the wavelength, the distribution bears a striking resemblance to the familiar Planckian distribution of thermal radiation emitted by an incandescent light source. With most of the lines occurring at 320 nm, just beyond what would be perceived as blue by the human eye, the temperature of this hypothetical light bulb would have to be 9,000 K (8727 °C / 15740 °F).

This seemingly random value may suggest an unexpected connection to cosmology: Shortly after the “big bang”, the early universe was dominated by pure energy. As it subsequently expanded and cooled down, the elementary particles began to condense and form the matter that makes up the known universe today. This fateful transition took place at 9,000 K. Pure coincidence? Perhaps. Nevertheless, the researchers nevertheless felt this discovery to be curious enough to turn to the broader scientific community to search for a more satisfying explanation. After all, as was so aptly stated by the late great Isaac Asimov, “the most exciting phrase to hear in science, the one that heralds new discoveries, is not `Eureka!' (I found it!) but ‘That's funny…’ ”.