A magnetic stirrer bar with an integrated process monitoring system 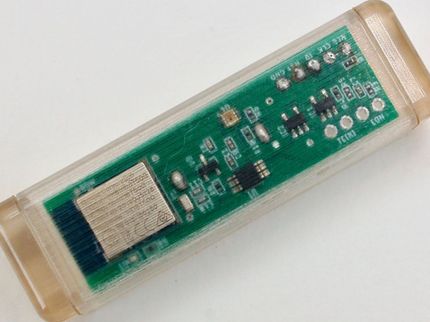 The Smart Stirrer can transmit data on the color, viscosity and other attributes of the solution it is stirring.

Miniaturized computer systems and wireless technology are offering scientists new ways to keep tabs on reactions without the need for larger, cumbersome equipment. In a proof-of-concept study in ACS Sensors, researchers describe an inexpensive new device that functions like a conventional magnetic stir bar, but that can automatically measure and transmit information on a solution's color, viscosity and a variety of other attributes to a smart phone or computer.

The team made two versions of the Smart Stirrer based on different integrated circuits, one a microcontroller and the other an all-in-one system on a chip. To customize the Smart Stirrer for different applications, the team used a modular design, in which sensors can be added as needed. In experiments, they confirmed they could detect color, electrical conductivity and, with careful calibration, viscosity. Additional low-cost commercially available sensors, as well as custom ones, could be used to adapt the device for many new applications, the researchers say. They note one limitation: the narrow range of temperatures within which the Smart Stirrer can function, a restriction that they say is inherent to most digital electronics. Ultimately, they predict that this approach could provide a platform for digitizing chemistry in research labs and industrial manufacturing.