On the road to conductors of the future 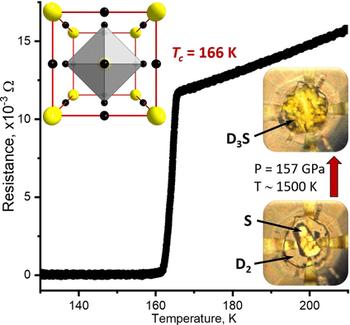 Superconducting wires can transport electricity without loss. This would allow for less power production, reducing both costs and greenhouse gasses. Unfortunately, extensive cooling stands in the way, because existing superconductors only lose their resistance at extremely low temperatures. In the journal Angewandte Chemie, scientist have now introduced new findings about hydrogen sulfide in the H(3)S form, and its deuterium analogue D(3)S, which become superconducting at the relatively high temperatures of -77 and -107 °C, respectively.

This is even true in comparison with the current front-runners, copper-containing ceramics with transition temperatures that start at about -135 °C. Despite extensive research into sulfur/hydrogen systems, many important questions remain. Most importantly, superconducting hydrogen sulfide was previously produced from "normal" hydrogen sulfide, H(2)S, which was converted into a metal-like state with a composition of H(3)S under pressures of about 150 GPa (1.5 million bar). Such samples were inevitably contaminated by hydrogen-depleted impurities that can distort experimental results. To avoid this, researchers led by Vasily S. Minkov have now produced stoichiometric H(3)S by heating elemental sulfur directly with an excess of hydrogen (H(2)) with a laser, under pressure. They also produced samples made with deuterium (D(2))--an isotope of hydrogen.

The cause of the relatively high transition temperature of H(3)S is its hydrogen atoms, which resonate with an especially high frequency within the crystal lattice. Because deuterium atoms are heavier than hydrogen, they resonate more slowly, so lower transition temperatures were expected for D(3)S. The team at the Max-Planck Institute for Chemistry (Mainz, Germany), the University of Chicago (USA), and the Soreq Nuclear Research Center (Yavne, Israel) used a variety of analytical methods to refine the phase diagrams for H(3)S and D(3)S in relation to pressure and temperature, and to shed additional light on their superconducting properties.

At 111 to 132 GPa and 400 to 700 °C, the syntheses produced nonmetallic, electrically isolating structures (Cccm phases) that do not become a metal when cooled or pressurized further. They contain H(2) (or D(2)) units within the crystal structure, which suppress superconductivity. The desired superconducting structures, cubic Im-3m phases, were obtained by syntheses above 150 GPa at 1200 to 1700 °C. They are metallic and shiny with low electrical resistance. At 148 to 170 GPa, samples of Im-3m-H(3)S had transition temperatures around -77 °C. The D(3)S analogues had a transition temperature of about -107 °C at 157 GPa, which is significantly higher than expected. Decrease of pressure reversibly leads to an abrupt reduction of the transition temperature and loss of metallic properties. This is caused by rhombohedral distortions in the crystal structure (R3m phase). Heating under pressure irreversibly transforms the R3m phase into the Cccm phase. R3m is clearly a metastable intermediate phase that only occurs during decomposition.

In the future, the researchers hope to find other hydrogen-rich compounds that can be converted to metals without high pressures and become superconducting at room temperature.