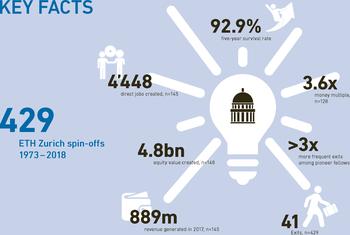 Growth in numbers: The illustration shows some results of the study.

As well as generating more jobs on average than other Swiss start-​ups, ETH spin-​offs are also acquired more frequently. A decisive factor, according to University of St.Gallen’s comprehensive analysis, comes from the institutional support for entrepreneurship.

With around 500 ETH spin-​offs now in existence, these businesses play a key role in the transfer of knowledge to the Swiss economy. In order to estimate the performance and economic added value of these companies, a detailed analysis was performed for the third time after similar analyses in 2008 and 2015. The analysis assessed four categories: human resources factors, influence on the economy and innovation, financial matters and operational aspects.

Ninety-​five percent of the spin-​offs are still located in Switzerland, with the majority based in Zurich, thus enabling them to boost the country’s economy and capacity for innovation. The group of 145 ETH spin-​offs analysed as part of the study was shown to have created around 4,500 full-​time equivalent (FTE) jobs. Each company provided about 30 positions on average, more than twice the average number for Swiss start-​ups. ETH Zurich spin-​offs also demonstrate clear signs of growth: in 2008, such enterprises generated only seven new jobs on average.

Major differences are evident between the sectors, too. Companies in the field of electrical engineer-​ing and electronics – with more than 2,000 FTEs – are the frontrunners when it comes to the number of jobs created. The number of patents per company – an indicator of innovative strength – is also highest in the electronics sector.

Creating a Value of Almost CHF 5 Billion in Equity

The group analysed – a good third of all ETH Zurich spin-​offs – generated almost CHF 900 million in revenue in 2017. The financial figures therefore clearly show that ETH spin-​offs represent an attractive investment option, with the money multiple at 3.6 on average. The overall equity value of this group is almost CHF 5 billion – extrapolated to all ETH spin-​offs, the value would be closer to CHF 10 billion. Biotech and pharmaceutical companies receive by far the most investor funds.

ETH Zurich built up its support for spin-​offs early on, in part through ETH transfer, the technology transfer office founded in 2005. The Pioneer Fellowship funding programme has also proven to be a factor in their success: enterprises founded by Pioneer Fellows have significantly higher chances of a successful exit. The university also developed actively utilized networking opportunities. Furthermore, the number of spin-​offs founded at ETH Zurich continues to rise and remains at a consistently high level, with more than 25 spin-​offs founded each year.

“It is pleasing to see how the spin-​off culture is continuing to develop at ETH Zurich. The study confirms that my predecessor Roland Siegwart was justified in establishing the Pioneer Fellowships and that we remain on the right track,” says Detlef Günther, Vice President for Research and Corporate Relations. The number of female entrepreneurs involved in founding these enterprises has also risen since 2007, with the figure currently at around 8%. “It is particularly important to me that we continue to strive for gender equality in our spin-​off community,” notes Günther. In closing, he says, “We want to keep improving our support services for spin-​offs over the next few years – in close dialogue with the companies.”