Radical in the Black Box

Chemists Reveal the Business Secret of a Catalyst 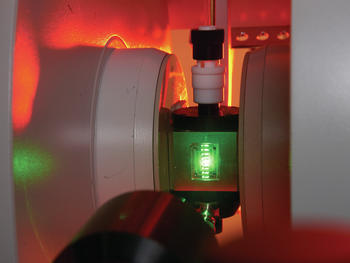 View into the EPR spectroscope in the research department of Prof. Angelika Brückner

Chemists at the Leibniz Institute for Catalysis in Rostock were able to observe the molecular functioning of the catalyst in a redox reaction and identify important intermediate steps. For this purpose, they coupled, for the first time worldwide, four highly modern measuring methods that work in different wavelength ranges: with infrared, UV and X-ray radiation as well as with microwaves in the magnetic field. In this way, they uncovered the complete catalytic mechanism for the selective oxidation of benzyl alcohol to benzaldehyde. As a basic chemical, benzaldehyde, which smells intensely of bitter almond, is used mainly for perfumes and cosmetics.

Like so often in chemistry, this reaction takes place in a black box. Starting materials, catalyst and solvent are placed in a reaction vessel where they react to form the desired product, benzaldehyde. So far it is clear: The presence of the catalyst makes this process possible or at least accelerates it. But which of its components activate the starting materials, in which order, which reactive intermediates are formed and how they influence the reaction - all this remains in the dark.

However, this information is essential for a targeted catalyst design. For oxidation to benzaldehyde, the industry usually uses oxidants such as chromate or hypochlorite, which are problematic for the environment and costly to dispose of. For this reason, researchers around the world are experimenting in the laboratory with oxygen, O2, as a more elegant oxidant. Unfortunately, they are getting only inadequate results in terms of yield. The aim is therefore to improve the catalyst, for which it is best to observe it closely at work, so to speak.

This is the specialty of Prof. Dr. Angelika Brückner, head of the research department "Catalytic In-situ Studies" and her group leader Dr. Jabor Rabeah. They excite samples with radiation of different energy and wavelength. Specific absorptions of all species involved allow conclusions to be drawn about their properties, such as oxidation states or binding situations, and thus also about their function and role in the chemical process.

At the heart of the redox reaction under investigation is a copper complex stabilized by an organic ligand, to a certain extent the armor of the catalyst. The catalyst also includes an auxiliary agent, in this case a radical called TEMPO, a term derived from the acronym of its chemical structure: TEtramethylPiperidinylOxyl.
The catalyst thus consists of three components, plus the starting material and the oxidizing agent O2. Such a "complex system", as Brückner and Rabeah say, is best approached using several different methods. The hurdle here was that these measurements had to be made in the same reaction vessel, in the same experiment, i.e. simultaneously. Angelika Brückner: "Only in this way can we guarantee identical experimental conditions. Carrying out the analyses individually and in sequence always involves certain differences in the reaction conditions, which would make it difficult to compare the results".

For the parallel measurements, the researchers initially chose infrared and somewhat more energetic UV rays as well as electron paramagnetic resonance (EPR) spectroscopy, which detects unpaired electrons. For example, the role of the excipient TEMPO, which has such an unpaired electron - which makes it highly reactive on the one hand and introduces the term "radical" on the other - had to be clarified.

In fact, the chemists could see during their first measurements that TEMPO interferes with the reaction. But in what way? When the reaction starts, some of the copper particles change their valence from Cu-I to Cu-II. Until now, experts have mostly assumed that the Cu-II species forms a compound during the reaction in the form of a so-called dimer and that TEMPO is primarily responsible for oxidation of Cu-I to Cu-II.

To clarify these assumptions, the Rostock chemists needed a more precise view of the copper components using a high-energy X-ray beam. For this purpose, they cooperated with the SOLEIL synchrotron in Paris. First, they acquired a compact EPR spectrometer, which they completed by cleverly modifying the measuring cell with an IR and a UV probe. They also adapted it constructively for the experimental setup at the synchrotron.

Armed with four such ultra-sharp vision aids, the LIKAT researchers at SOLEIL in Paris were for the first time able to observe one and the same process simultaneously from several perspectives. "And we were finally able to resolve on what has been controversially discussed in the scientific literature so far", says Dr. Rabeah.

They discovered that TEMPO does not oxidize itself at all, as previously assumed. Instead, it activates the oxidizing agent oxygen. In addition, they were able to detect the much-discussed dimer. However, they found that it splits back into monomers during the reaction. Prof. Brückner: "But this has no influence whatsoever on the reactivity of the system. Consequently, this dimer is not important for the reaction.

With these findings, experts can now further develop and, above all, optimize the oxidation of benzyl alcohol using oxygen. In the long term, this work will lead to replacing the industrial process with an environmentally friendly one. And, as Jabor Rabeah emphasizes, the new coupling technology can also be used for mechanistic analyses of other reactions - right down to metabolic processes in living organisms.