Biodiesel made from discarded cardboard boxes 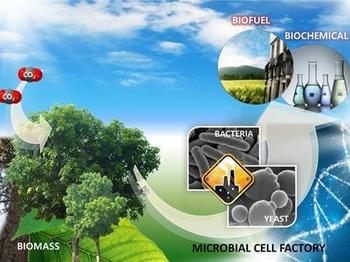 Automobile exhaust emitted by fossil-fuel-based vehicles, especially those operating on diesel, is known to be a major source of fine dust and greenhouse gases. Using biodiesel instead of diesel is an effective way of coping with climate change caused by greenhouse gases while reducing fine dust emission. However, the current method of producing biodiesel by chemically processing vegetable oil or waste cooking oil-such as palm or soybean oil-is limited because of the unreliable availability of raw materials.

Dr. Sun-Mi Lee and her team at the Clean Energy Research Center of the Korea Institute of Science and Technology (KIST) have announced that they have developed a novel microorganism capable of producing biodiesel precursors from lignocellulosic biomass such as discarded agricultural by-products, waste paper, and cardboard boxes. This microorganism has achieved the product yield twice of what was obtainable from its predecessors.

This novel microorganism can produce biodiesel precursors during the process of metabolizing sugars contained in the lignocellulosic biomass that it feeds on. The sugar contained in lignocellulosic biomass is generally composed of 65-70% glucose and 30-35% xylose. While microorganisms that exist in nature are effective in producing diesel precursors by metabolizing glucose, they do not feed on xylose, thus limiting the yield of the raw materials.

To solve this problem, the KIST research team developed a new microorganism that can produce diesel precursors by effectively metabolizing xylose as well as glucose. In particular, the metabolic pathway of the microorganism was redesigned using genetic scissors to prevent interference with the supply of coenzymes essential for producing diesel precursors. The ability to metabolize xylose was improved by effectively controlling the process of evolution in a laboratory, for instance, by selecting and cultivating only those microorganisms that delivered excellent performance.

This confirmed the possibility of producing diesel precursors using all sugar components including xylose from lignocellulosic biomass, and the product yield was almost doubled, compared to that obtained in previous studies which employed metabolic pathways having unresolved coenzyme issues.

"Biodiesel is an effective alternative fuel that can reduce greenhouse gas and fine dust emissions without restricting the operation of existing diesel-fueled vehicles, and we developed a core technology that can improve the economic efficiency of biodiesel production," said Dr. Sun-Mi Lee of KIST. "At a time like this, when we feel climate change in our bones due to frequent typhoons and severe weather phenomena, expanded supply of biofuels that help us cope with climate change most quickly and effectively will facilitate the expansion of related industries and the development of technology."