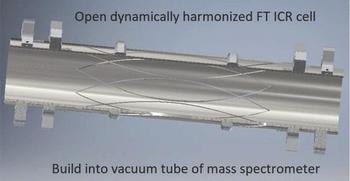 Mass spectrometers are widely used to analyze highly complex chemical and biological mixtures. Skoltech scientists have developed a new version of a mass spectrometer that uses rotation frequencies of ionized molecules in strong magnetic fields to measure masses with higher accuracy (FT ICR). The team has designed an ion trap that ensures the utmost resolving power in ultra-strong magnetic fields.

The ion trap is shaped like a cylinder made up of electrodes, with electric and magnetic fields generated inside. The exact masses of the test sample's ions can be determined from their rotation frequencies. The electrodes must create a harmonized field of a particular shape such that the ions rotate predictably. A trap with such a field is called a Dynamically Harmonized Cell (DHC).

The DHC was invented in 2011 by Evgeny Nikolaev, a Professor at the Skoltech Center for Computational and Data-Intensive Science and Engineering (CDISE). Although in reality, the cell's field is of a highly complex nature and is not harmonized, for fast rotating ions in the magnetic field it still appears as harmonized due to the averaging effect, hence the cell's name. So far, the best trap in terms of spectrum measurement accuracy, the DHC has been widely used in research and commercial mass spectrometers with a high demand on accuracy and integrated into the strongest magnetic field mass spectrometer at the National High Magnetic Field Laboratory in Tallahassee, FL.

Super strong magnets cost tens of millions of dollars. Mass measurement accuracy is supposed to increase linearly with magnetic field strength, but it does not: in reality, the pattern is non-linear, and the increase in accuracy is much slower than expected.

The scientists assumed that non-linearity occurs because the level of vacuum in the cell is not sufficient, no matter how advanced are the pumps. They developed a trap with both ends open for easy evacuation of residual gases and named it the 'Zig-Zag Cell'.

According to the study lead, Professor Evgeny Nikolaev, mass spectrometers with a new type of cell will ensure higher accuracy for biological samples and complex mixtures, such as oil, where even existing mass spectrometers of this type with the DHC can detect up to 400,000 compounds.