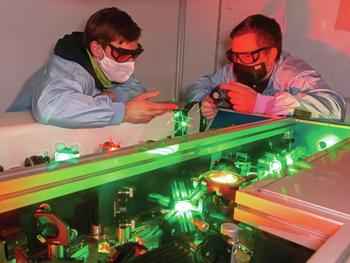 First author of the current study Tobias Helk (l.) and Dr Frederik Tuitje in a laser laboratory at the University of Jena.

Researchers from Friedrich Schiller University Jena, the University of California Berkeley and the Institut Polytechnique de Paris use intense laser light in the extreme ultraviolet spectrum to generate a non-linear optical process on a laboratory scale – a process which until now has only been possible in a large-scale research facility. As the team writes in the current issue of the journal “Science Advances”, they were able to achieve this effect for the first time with a laser source on a laboratory scale and thus investigate the surface of a titanium sample down to the atomic level.

Chemical reactions, such as those that occur when charging and discharging a battery, take place primarily on surfaces and at interfaces. While it is very easy to study the macroscopic products of a reaction, it has so far been difficult to gain a more accurate picture of the course of chemical reactions at the atomic level. This requires measurement methods that allow observations to be made on the extremely short time scales on which chemical reactions take place.

In principle, spectroscopic methods with very short laser pulses for temporal resolution are suitable for this. At the same time, the laser light must be of a very short wavelength, as physicist Tobias Helk of Friedrich Schiller University Jena explains: “To be able to specifically investigate individual elements using core electron resonance, laser light with a wavelength of a few nanometres is required – i.e., radiation in the extreme ultraviolet (XUV) or X-ray range of the spectrum.”

To observe chemical processes, it is also important to be able to study the interfaces between media and material surfaces where chemical reactions take place, adds Helk. In addition to short wavelengths and short durations, the laser pulses must also have an extremely high intensity to be able to cause non-linear effects, as they are called, which allow the measurement signal to be traced back to the interface.

So far, however, there are very few methods for generating such intense laser radiation in the XUV and X-ray range. “Until now, this has only been possible at large-scale research facilities such as the FLASH free-electron laser at DESY,” says Prof. Christian Spielmann of the Institute of Optics and Quantum Electronics at the University of Jena. However, he and his team, together with researchers from the USA and France, have now found a way to make such investigations possible in a standard laser laboratory.

To this end, a soft X-ray laser from the Laboratoire d’Optique Appliquee in Palaisseau (France) was used as the light source. “In our experiment, we set up a special focusing geometry, consisting of a elliptically shaped mirror that enables us to concentrate the laser radiation onto a very small area,” says doctoral candidate Helk, lead author of the study. The radiation with a wavelength of 32.8 nanometres was focused on an ultra-thin titanium foil and its non-linear interaction with the matter particles was analysed.

“As is already known from studies with radiation in the visible and infrared range, light with new properties can be generated through the interaction of light particles and matter particles,” explains Helk. In a process known as non-linear frequency doubling (or second harmonic generation), for example, two photons of the irradiated light are absorbed by the material and a photon with twice the frequency (twice the energy) is emitted.

And it is precisely this effect that the researchers were able to demonstrate. With a spectrometer, they separated the radiation resulting from the interaction with the titanium foil and recorded it using a camera. By comparing simulations with the measurement results, they were also able to show that the resulting radiation originates on the surface of the titanium foil and not within the material.

“Being able to perform this form of surface spectroscopy in the XUV range on a laboratory scale opens up completely new perspectives. For example, chemical processes on surfaces or at hidden interfaces can now be studied from the perspective of a single atom in otherwise complex chemical environments,” says Prof. Michael Zürch of the University of California, describing the significance of the result. Furthermore, the short duration of the pulses used enables the investigation of dynamic processes at interfaces, such as those that occur during the charging and discharging of batteries.