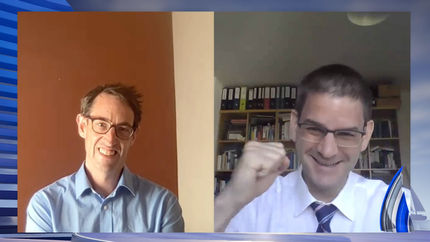 The European Patent Office (EPO) honoured Austrian and Swiss researchers Robert N. Grass and Wendelin Stark with the European Inventor Award 2021 in the "Research" category. Their technology for encapsulating data in DNA inside tiny glass spheres provides a novel means of preserving information, as well as a robust DNA barcode for use in supply chains.

"Grass and Stark's remarkable cross-disciplinary research has led to an invention that has the potential to reshape our approach to long-term data storage," says EPO President António Campinos. "With digitalisation transforming almost every aspect of society, this innovation represents a leap forward in terms of improving the durability of the information we produce and holds promise for applications in a vast range of products."

This year's European Inventor Award ceremony was held digitally, and for the first time was open to the public who tuned in from around the world. The Award, one of Europe's most prestigious innovation prizes,  is presented annually by the EPO to distinguish outstanding inventors from Europe and beyond who have made an exceptional contribution to society, technological progress and economic growth. The finalists and winners in five categories (Industry, Research, SMEs, Non-EPO countries and Lifetime achievement) were selected by an independent international jury from a pool of hundreds of inventors and teams of inventors put forward for this year's award.

Working together at the ETH Zurich's Department of Chemistry and Applied Biosciences, Robert Grass and Wendelin Stark shared one trait in particular: an engineering mindset and a desire to translate medical or biology-focused technologies into practical inventions. DNA writing (synthesis) and reading (sequencing) was one such area that captured their attention, specifically the idea that DNA - in addition to storing the genetic information of every living creature - could be used as a means of preserving other forms of data. A key challenge however was the fact that unprotected DNA strands soon chemically degrade after exposure to water, air or heat. To solve this problem, the pair looked for inspiration in fossils, where DNA is preserved for hundreds of thousands of years. Grass's team (under Stark's guidance and using a synthesis technique of fellow ETH Zurich scientist Reinhard Heckel) successfully sealed synthetic DNA inside tiny glass particles with diameters up to 10 000 times thinner than a sheet of paper. These non-porous "glass fossils" protect the DNA from corrosive agents and temperature damage. The DNA can later be easily recovered by treating the particles with a fluoride solution that dissolves the glass but does not harm the information.

ETH Zurich filed a European patent application for Grass and Stark's invention, which was granted in 2018. With the help of their patents, Grass and Stark have since gone on to commercialise the technology through the ETH spin-off company Haelixa, one of several ETH spin-offs co-founded by the researchers.

The company's glass ‘fossils' have proven to be effective as a robust barcode for tracking purposes - the miniscule DNA-containing particles can be applied to a product or substance and later retrieved for verification. The technique has been used to trace underground water flow and to verify products in supply chains. The invention's potential for data storage is also gaining impetus. In 2018, the 15MB album ‘Mezzanine' by Massive Attack was encoded into strands of synthetic DNA and re-released in DNA format (in a spray can containing around a million DNA spheres). With their eyes firmly on the future, Grass and Stark are currently working to make DNA storage available to all, turning their cutting-edge research into an everyday, affordable technology.

"We envision a world very close down the road where reading DNA is really accessible," says Grass. "If you take the world we work in, reading and writing DNA is like taking pen to paper - a much more commonplace medium for people to interact with." Stark highlights the inspiration for their technology: "Nature is wonderful; we continue to be fascinated by its genius."