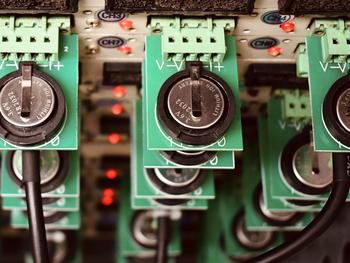 The energy density of traditional lithium-ion batteries is approaching a saturation point that cannot meet the demands of the future – for example in electric vehicles. Lithium metal batteries can provide double the energy per unit weight when compared to lithium-ion batteries. The biggest challenge, hindering its application, is the formation of lithium dendrites, small, needle-like structures, similar to stalagmites in a dripstone cave, over the lithium metal anode. These dendrites often continue to grow until they pierce the separator membrane, causing the battery to short-circuit and ultimately destroying it.

For many years now, experts worldwide have been searching for a solution to this problem. Scientists at Friedrich Schiller University in Jena, together with colleagues from Boston University (BU) and Wayne State University (WSU), have now succeeded in preventing dendrite formation and thus at least doubling the lifetime of a lithium metal battery.

During the charge transfer process, lithium ions move back and forth between the anode and the cathode. Whenever they pick up an electron, they deposit a lithium atom and these atoms accumulate on the anode. A crystalline surface is formed, which grows three-dimensionally where the atoms accumulate, creating the dendrites. The pores of the separator membrane influences the nucleation of dendrites. If ion transport is more homogeneous, dendrite nucleation can be avoided.

“That’s why we applied an extremely thin, two-dimensional membrane made of carbon to the separator, with the pores having a diameter of less than one nanometer,” explains Professor Andrey Turchanin from the University of Jena. “These tiny openings are smaller than the critical nucleus size and thus prevent the nucleation that leads to the formation of dendrites. Instead of forming dendritic structures, the lithium is deposited on the anode as a smooth film.” There is no risk of the separator membrane being damaged by this and the functionality of the battery is not affected.

“To test our method, we recharged test batteries fitted with our Hybrid Separator Membrane over and over again,” says Dr Antony George from the University of Jena. “Even after hundreds of charging and discharging cycles, we couldn’t detect any dendritic growth.”

“The key innovation here is stabilizing electrode/electrolyte interface with an ultra-thin membrane that does not alter current battery manufacturing process,” says Associate Professor Leela Mohana Reddy Arava from the WSU. “Interface stability holds key in enhancing the performance and safety of an electrochemical system.”

Applied for a patent

High energy density batteries extend the driving range of electric vehicle (EVs) for the same weight/volume of the battery that a modern EV possesses and make portable electronic devices last longer in a single charge. “The separator gets the least amount of attention when compared to the other components of the battery,” says Sathish Rajendran, a graduate student at WSU. “The extent to which a nanometer thick two-dimensional membrane on the separator could make a difference in the lifetime of a battery is fascinating.”

As a result, the research team is confident that their findings have the potential to bring about a new generation of lithium batteries. They have therefore applied for a patent for their method. The next step is to see how the application of the two-dimensional membrane can be integrated into the manufacturing process. The researchers also want to apply the idea to other types of batteries.