How Green Is Your Plastic?

Economical synthesis of polyacrylates and polymethacrylates from biobased materials 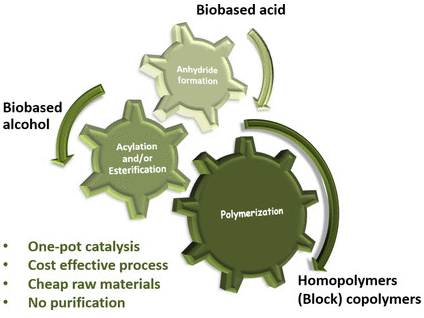 Despite the best efforts of industry to work towards sustainability, most plastics (or polymers) are still made using non-renewable fossil fuels. However, researchers have now found an economical method for producing biobased acrylate resins. The study, published in the journal Angewandte Chemie, shows how all the synthesis steps, from initial building blocks right up to polymerization, can be carried out in a single reactor (one pot), minimizing environmental impact.

To make these polyacrylates and polymethacrylates more sustainable, Christophe Thomas and his team from the Institut de Recherche de Chimie in Paris, France, used alcohols from biobased or natural sources, rather than fossil sources. These included plant-based lauryl alcohol, menthol, tetrahydrogeraniol (a pheromone-like substance), vanillin, and ethyl lactate.

In addition to sustainability through renewable resources, the team also targeted synthesis in as few steps as possible, in other words a one-pot process. This meant they had to find catalysts that were suitable for several steps of the process, and also to finely tune all the other synthesis conditions, such as solvents, concentrations, and temperatures.

The first step in this kind of synthesis is the activation of acrylic or methacrylic acid. The researchers were able to identify catalysts from simple salts. These substances were also suitable for the next step, reacting the biobased alcohols with acrylic or methacrylic anhydride (a condensed form of the acids) to give the corresponding esters, which are the building blocks of the subsequent polymer.

“This monomer preparation step is highly efficient and allowed us to perform the polymerization in the same reactor,” says Thomas. Thus, without purifying the intermediate products, the team was ultimately able to produce block copolymers, which are widely used in plastics production, from two or three different individual polymers produced separately.

The team’s biobased plastics had a number of beneficial properties, depending on the monomers making them up. For example, the resin produced with a lactic acid side chain (poly(ELMA)) was hard and brittle, while the one produced with the more flexible tetrahydrogeraniol side chain (poly(THGA)) was pliable at room temperature. The authors emphasize the numerous available possibilities thanks to the wide variety of biobased alcohols at their disposal.

Aside from the versatility of the team’s approach, their one-pot synthesis also helps reduce the environmental footprint. Since work-up solvents account for a large proportion of the E-factor, or environmental impact, of plastics synthesis, one-pot processes without work-up obviously greatly reduce this factor. Their most successful synthesis reduced the E-factor by three quarters, demonstrating the significance of this research.