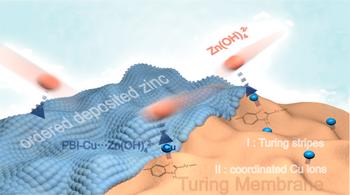 Zinc-based batteries are promising options for energy storage devices owing to their low cost and high energy density. However, they may encounter serious dendrite issues, especially at high areal capacities and current densities.

The crests and troughs in the proposed membrane could effectively adjust the Zn(OH)42- distribution and provide more zinc deposition space. The coordinated Cu ions during membrane formation could interact with Zn(OH)42-, further smoothing zinc deposition.

The researchers found that even at a high current density of 80 mA cm-2, the Turing membrane enabled an alkaline zinc-iron flow battery (AZIFB) to work stably with an ultrahigh areal capacity of 160 mAh cm-2 for approximately 110 cycles, showing an energy efficiency of 90.10%. This is by far the highest value ever reported among zinc-based batteries with such a high current density.