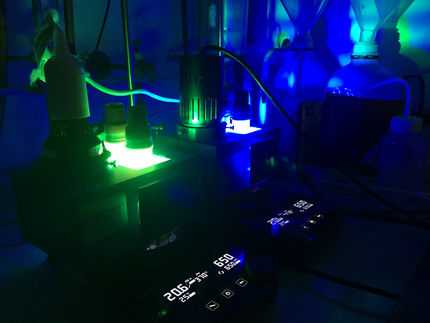 The reaction uses a catalyst activated with blue LED light.

Chemistry researchers at the University of Bath have developed a new method using blue light to create pharmaceuticals in a more sustainable way, significantly reducing the amount of energy needed and the chemical waste created in the manufacture process.

Synthesising small-molecule drugs normally requires several steps, each one creating waste products and solvent waste – these are often toxic and difficult to dispose of safely.

Currently, it is estimated that for every kilogram of drug made, around 100 kg of waste is produced, making it a hugely inefficient process.

The team at Bath, led by Dr Alex Cresswell, a Royal Society University Research Fellow in the University’s Department of Chemistry, has developed a new way of synthesising nitrogen-containing chemicals called primary amines, which are used in more than half of all pharmaceuticals.

The method uses a catalyst, activated by blue light, to speed up the reaction, and uses fewer steps, less energy and dramatically cuts down the waste created by drug development.

The team has tested the method by synthesising a drug used for multiple sclerosis (MS), Fingolimod (brand name Gilenya), which is made by Novartis and had worldwide sales of $3 billion in 2020.

Dr Cresswell said: “Making pharmaceuticals can be a wasteful process, with most of that waste being incinerated."

“Our new process synthesises α-trisubstituted primary amines using only one step, a goal that has eluded chemists for many years."

“People don’t really think about the pharmaceutical industry when it comes to carbon emissions, but some studies have calculated that big pharma emits more than the automotive industry."

“We’re really excited that our group is the first in the world to achieve this breakthrough, and hope that it could in the future lead to much more sustainable pharmaceutical manufacturing processes."

Whilst the new process is not likely to be adopted straight away by pharmaceutical companies for bulk manufacture of existing drugs, the team hopes that the method might speed up the process of discovery and development of new drugs, by making it easier to synthesise new chemical structures for testing.

Dr Cresswell said: “Building new molecules during the drug discovery process requires reactions that make it simple to ‘click’ atoms together in the required way, a bit like building models out of Lego."

“The aim is to make thousands of different derivatives for biological testing, and our new process gives chemists a way to connect certain atoms that simply wasn’t available before. This should help to speed up the discovery process.”

The team is now collaborating with several pharmaceutical companies to scale up the process.