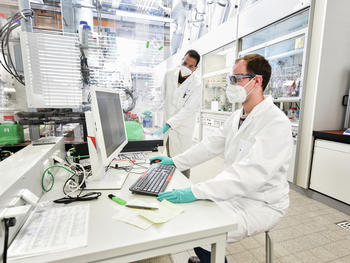 The new tritiation reaction is practical and robust to execute and could have an immediate impact in the discovery and development of pharmaceuticals.

Tritium 3H, a radioactive isotope of hydrogen, is commonly used in medicinal chemistry as a label to follow the course of a drug in the human body. Chemists like to use the technique to evaluate drug candidates and their metabolism. However, synthesis of the radiolabeled molecules is challenging.

A team led by Professor Tobias Ritter of the Department of Organic Synthesis at the Max-Planck-Institut für Kohlenforschung has now found a new way to label complex small molecules with tritium. In a joint research project with the development department of the Swiss pharmaceutical company Roche, they investigated ways to incorporate tritium into pharmaceuticals and other similar molecules that may be important derivatives for the drug industry.

The team took advantage of the special properties of arylthianthrenium salts that they developed two years ago. The thianthrene group can be introduced into pharmaceuticals selectively and at a late stage in a direct and predictable manner. "The unusual feature of this work is the reaction of arylpseudohalides with hydrogen, catalyzed for the first time by a homogeneous catalyst," explains Tobias Ritter. "Such reactions were previously unknown with conventional groups that can be introduced into pharmaceuticals. Normally, chemists use heterogeneous catalysts but those also often destroy other functional groups, which are frequently found in pharmaceuticals," the director annotates. The new approach does not require an inert atmosphere or dry conditions, making it practical to use.