Properties such as size, shape and surface condition of microparticles influence their hazardous potential for humans 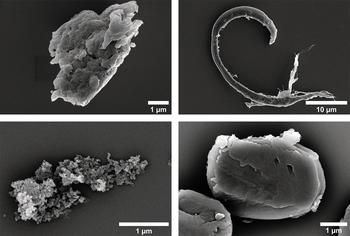 Properties such as size, shape and surface condition of microparticles influence their hazardous potential for humans.

Researchers at the University of Bayreuth want to find out the consequences of inhaled microplastics. In order to better understand them, they have conducted an interdisciplinary study to find out how the health risks of particles such as soot, grinding dust or asbestos are related to their physical properties. By comparing them with the properties of microplastic particles, more precise statements can be made about their potentially hazardous effects on health.

Microplastics are found everywhere in the environment, including in the atmosphere. As a result, we constantly breathe in microscopic plastic particles in our everyday lives. If these enter the respiratory tract, they can potentially be harmful to health. However, there are not yet enough scientific studies to be able to reliably assess the dangers posed by microplastics in the air. In a review article, a research team coordinated at the University of Bayreuth has now compiled the knowledge about the already well-studied health hazards of various microparticles and compared it with the properties of microplastics in order to identify possible hazards of microplastics.

The interdisciplinary team led by Bayreuth microplastic researchers Prof. Dr. Holger Kress and Prof. Dr. Christian Laforsch focused on microparticles such as asbestos, soot particles from car exhausts or dusts produced by sanding wood or stone. The authors from the fields of physics, biology, biochemistry, medicine and nano-sciences paid particular attention to the role of physical and chemical properties of the particles for their toxicity. Parameters such as the size, shape and surface charge of the particles, but also their persistence in the lungs and bacteria and biomolecules adhering to the particles can influence their hazard potential. For example, long fibres are often more dangerous than compact particles because long fibres are more difficult for the body to eliminate due to their shape and thus permanent inflammation in affected tissues is possible. As a result, such fibrous microparticles can be carcinogenic, which has been known for a long time for asbestos, for example.

If the significance of the physical and chemical properties for the health effects of the microparticles is known, possible dangers of microplastics for human health can be recognised earlier, according to the scientists. "This knowledge enables us to identify important open questions about the hazard potential of microplastics. In this way, we can contribute to targeted research and faster assessment of the risk of microplastics for humans," explains Prof. Dr. Holger Kress, initiator of the study and Professor of Biological Physics at the University of Bayreuth.

"With our work, we are helping to understand the basic mechanisms behind the health effects of microparticles. Much of what is already known for other microparticles can perhaps also be applied to microplastics," adds Simon Wieland, first author of the article and doctoral student at the University of Bayreuth. Therefore, he says, it is important to benefit from this knowledge to enable a quick assessment of the risk of microplastics in the air we breathe.

Now it is important to put the newly gained knowledge to use. "There are still many unanswered questions about the physical and chemical properties of microplastics. Microplastics are not all the same, but are made up of many different particles with different chemical compositions, surface properties, shapes and sizes," says Prof. Dr. Christian Laforsch, spokesperson of the Collaborative Research Centre 1357 Microplastics at the University of Bayreuth and holder of the Chair of Animal Ecology I. That is why it is now of great importance to also take this diversity into account in toxicological research. This is the only way to comprehensively understand the effects of microplastics on humans and the environment, the researcher concludes.