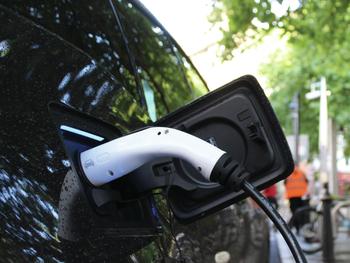 Engineers at the University of Illinois Chicago are among a collaborative team that has developed a material that could give fuel cell systems a competitive edge over the battery systems that currently power most electric vehicles.

In contrast to lithium batteries, fuel cell technology relies on catalyst-driven chemical reactions to create energy. Lithium batteries can typically achieve a range of 100-300 miles on one charge, but they also are vulnerable to the high cost of cathode materials and manufacturing and require several hours to charge. Alternatively, fuel cell systems take advantage of abundant elements such as oxygen and hydrogen and can achieve more than 400 miles on a single charge – which can be done in under five minutes. Unfortunately, the catalysts used to power their reactions are made of materials that are either too expensive (i.e., platinum) or too quickly degraded to be practical.

Until now, that is. With the development of the new additive material, scientists can make an inexpensive iron-nitrogen-carbon fuel cell catalyst more durable. When added to the chemical reactions, the additive material protects fuel cell systems from two of its most corrosive byproducts: unstable particles like atoms, molecules or ions called free radicals and hydrogen peroxide. Findings from their experiments are reported in the science journal Nature Energy.

Reza Shahbazian-Yassar, professor of mechanical and industrial engineering at the UIC College of Engineering, and colleagues used advanced imaging techniques to investigate the reactions with the material, an additive comprised of tantalum-titanium oxide nanoparticles that scavenge and deactivate the free radicals. The high-resolution imaging of the atomic structures allowed the scientists to define the structural parameters needed for the additive to work.

“In our lab, we are able to use electron microscopy to capture highly detailed, atomic-resolution images of the materials under a variety of service conditions,” said study co-corresponding author Shahbazian-Yassar. “Through our structural investigations, we learned what was happening in the atomic structure of additives and were able to identify the size and dimensions of the scavenger nanoparticles, the ratio of tantalum and titanium oxide. This led to an understanding of the correct state of the solid solution alloy required for the additive to protect the fuel cell against corrosion and degradation.”

“The ratio is the key to the radical scavenging properties of the nanoparticle material and the solid-state solution helped sustain the structure of the environment,” Shahbazian-Yassar said.

The experiments showed that when the scavenger nanoparticle material was added to the reactions of fuel cell systems, hydrogen peroxide yield was suppressed to less than 2% — a 51% reduction — and current density decay of fuel cells was reduced from 33% to only 3%.

“Fuel cells are an attractive alternative to batteries because of their higher driving range, fast recharging capabilities, lighter weight, and smaller volume, provided that we can find more economical ways to separate and store hydrogen,” Shahbazian-Yassar said. “In this paper, we report on an approach that gets us much closer to making fuel cell-powered vehicles and other fuel cell technologies a reality.”