Wet electrolyte could be a key to inexpensive energy storage 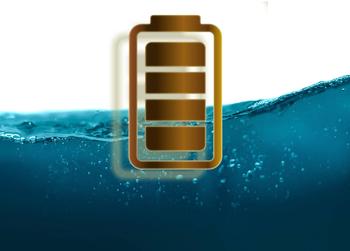 Computer simulations and experiments have revealed a new electrolyte for lithium-ion batteries that can contain higher quantities of water (symbolic image).

For scientists working to create the next generation of batteries, water has typically been the enemy. For example, lithium-ion batteries typically need to be produced under extremely dry conditions for them to hold large amounts of charge. But a new discovery may show that a specific type of lithium-ion battery can literally hold water.

In a battery, ions move between the two electrodes to balance the electrical charge created during charging and discharging. Electrolytes are the battery component that makes this happen. Based on detailed models of water in different electrolyte environments created through earlier computer simulations, U.S. Department of Energy’s (DOE) Argonne National Laboratory researchers developed a new battery electrolyte that can hold a thousand times more water than conventional electrolytes, according to Argonne senior battery chemist Zhengcheng ​“John” Zhang.

“We’ve always thought that water was going to cause major problems for a lithium-ion battery. However, it turns out that our formulation can hold dramatically more than previously known, which could help reduce costs in battery fabrication,” Zhang said.

Because lithium-ion batteries are ​“dry-cell” batteries, they can only contain trace amounts of moisture, which requires the need for special manufacturing facilities. However, by using an electrolyte composed of two kinds of salts — a lithium salt and an ionic liquid — the team was able to create a situation in which vastly more water molecules could be stably absorbed by the electrolyte.

To support the experiment results and investigate the underlying chemical mechanism, Argonne computational scientist Wei Jiang used the Argonne Leadership Computing Facility’s (ALCF’s) Theta supercomputer to perform simulations of the electrolyte near the electrode surface to get a picture of the behavior of the water molecules. The ALCF is a DOE Office of Science user facility.

“Modeling this complex process, which involves multiple length and time scales, requires the power of a supercomputer like Theta,” Jiang said. ​“The simulations gave us an atomic scale view into how water affects battery performance, providing insights that were not possible with laboratory experiments alone.”

However, the team’s simulations found that a new electrolyte, composed of a lithium salt and an ionic liquid, could separate and bind up water, sequestering individual water molecules. The Argonne team’s experimental work shows that this novel electrolyte can contain as much as a thousandfold more water than electrolytes currently used in electric vehicle and consumer batteries.

As revealed by the computer simulations, the key is that the water molecules do not gather into ​“puddles” and thereby lose reactivity.

“Even at the electrode surfaces, which are susceptible to water clustering, our atomistic simulations show that the single water molecules are very stable,” Jiang said.

“To a certain degree, having a salty electrolyte enables us to hold water,” Zhang said. ​“The water molecule is trapped by the different ions at a specific range of concentration ratios in the salty medium, and that makes it less reactive.”

This study provides a potential pathway for battery manufacturers to incorporate water in the battery fabrication process, allowing for lower-cost, more environmentally friendly manufacturing, according to Zhang.