Fuel from a Greenhouse Gas 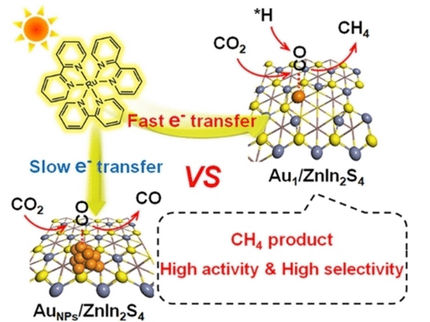 One step toward carbon dioxide (CO2) neutrality and the mitigation of both the greenhouse effect and the energy crisis would be to convert CO2 into hydrocarbon-based fuels like methane using light. In the journal Angewandte Chemie, a Chinese research team has introduced a highly effective photocatalyst based on gold atoms to make this transformation possible.

The photocatalytic conversion of CO2 occurs through a series of processes in which electrons are transferred. This can result in various products, including carbon monoxide (CO), methanol (CH3OH), methane (CH4), and other hydrocarbons. Eight electrons must be transferred on the way from CO2 to CH4— more than for other C1 products. Methane is the thermodynamically favorable end product, but the competing reaction to form CO only requires two electrons and is much faster, so it is kinetically favored. Effective and selective methanization is thus particularly challenging.

A team led by Hefeng Cheng (Shandong University, Jinan, China) and co-workers has now developed a practical approach to efficiently convert CO2 to CH4 using solar energy. The key to their success is a novel catalyst with single gold atoms. Because gold atoms aggregate in conventional preparative methods, the team developed a new strategy that uses a complex exchange to produce the catalyst.

Because of their unique electronic structures, single-atom catalysts behave differently from conventional metal nanoparticles. Also, when fixed to a suitable support, nearly all single atoms are available as active catalytic centers. In this new catalyst, single gold atoms are anchored to an ultrathin zinc–indium sulfide nanolayer and are each coordinated to only two sulfur atoms. Under sunlight, the catalyst was demonstrated to be very active with a CH4 selectivity of 77 %.

A photosensitizer (a ruthenium complex) absorbs light, becomes excited, and accepts an electron that is made available by an electron donor (triethanolamine). It then passes the electron on to the catalyst. The single gold atoms on the surface of the support act as “electron pumps”. They capture the electrons significantly more effectively than gold nanoparticles and transfer them to CO2 molecules and intermediates.

Detailed characterization and computations reveal that the catalyst activates the CO2 molecules to a much greater degree than gold nanoparticles, more strongly adsorbs the excited *CO intermediates, lowers the energy barrier for binding hydrogen ions, and stabilizes the *CH3 intermediate. This allows CH4 to be the favored product and minimizes the release of CO.