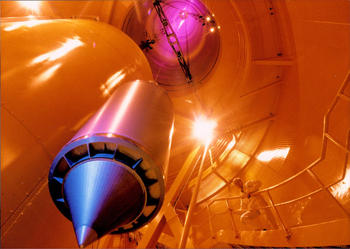 Experiment with a dramatic fall: The capsule is pulled up to the starting position in the drop tower, where the physicists generate a Bose-Einstein condensate by remote control and observe how it behaves at zero gravity - a step towards extremely-sensitive measuring devices for gravitation.

A sensitive measuring device must not be dropped - because this usually destroys the precision of the instrument. A team of researchers including scientists from the Max Planck Institute of Quantum Optics has done exactly this, however. And the researchers want to use this experience to make the measuring instrument even more sensitive. The team, headed by physicists from the University of Hanover, dropped a piece of apparatus, in which they generated a weightless Bose-Einstein condensate (BEC), to the bottom of a drop tower at the University of Bremen. The particles in a BEC lose their individuality and can be considered to be a 'super-particle'. The researchers want to use such an ultra-cold quantum gas at zero gravity to construct a very sensitive measuring device for the Earth's gravitational field - in order to find deposits of minerals, and also to settle fundamental issues in physics.

In a vacuum, a feather falls as quickly as a lead ball - something that is already presented to students as being irrefutable. "However, the equivalence principle is only a postulate that needs to be tested," says Ernst Maria Rasel, professor at the University of Hanover. According to the equivalence principle, the heavy mass with which bodies attract each other corresponds to the inertial mass, which resists an accelerating force. This means that in a vacuum all bodies hit the ground with the same speed. Physicists want to use a measuring device that measures gravity extremely accurately to investigate whether this hypothesis can really become a physical law. Ernst Maria Rasel’s team has now taken an initial step in this direction.

The researchers generated a Bose-Einstein condensate (BEC) in zero gravity and observed, for more than a second, how the atomic cloud behaves in free fall. To this end, they installed an atom chip developed by researchers working with Theodor W. Hänsch, Director at the Max Planck Institute of Quantum Optics, and solenoids, lasers, a camera and the necessary energy supply into a cylindrical capsule, which is about as high and wide as a door. After they had moved a cloud of several million rubidium atoms onto the atom chip, they dropped the complete apparatus 146 metres into the depths. A tower at the Center of Applied Space Technology and Microgravity of the University of Bremen specializes in such scientific cases.

As the capsule was falling to the ground for four seconds in the drop tower, the researchers generated the BEC on the atom chip, initially by remote control: strong magnetic fields and lasers hold the particles on the chip and cool them. At a few millionths of a degree above absolute zero, the temperature at minus 273.16 degrees Celsius, the particles have lost almost all of their energy and assume a new physical state: all atoms are now in the quantum mechanical ground state so that they can no longer be distinguished as individual particles in the quantum gas.

An atom chip - the fast path to ultra-cold quantum gas

"They behave completely coherently, practically like a heap of atoms that assumes the properties of a single huge atom," says Tilo Steinmetz, who was involved in the experiment as a researcher from the Max Planck Institute of Quantum Optics. Since the laws of quantum mechanics say that every particle can also be considered to be a wave, it is possible to describe what is happening in a different way: A wave packet of matter forms in which the atoms no longer stay at fixed locations - they are delocalized. This grouping is maintained until an energetic push, however small, mixes it up.

"We generate a BEC in less than a second on our atom chip. With conventional laboratory apparatus, this takes up to one minute," says Tilo Steinmetz. In addition, an experiment on an atom chip requires significantly less electrical power. "It is thus ideal for use in a drop tower capsule, where energy supply and cooling present a logistical challenge," says Steinmetz.

As soon as the atoms on the chip had merged into the super-particle, the researchers carefully loosened the hold of the trap and released the BEC. The camera in the capsule now enabled them to observe how the condensate spread. This movement reacts extremely sensitively to external fields - to differences in Earth’s gravitational field, for example. These differences exist because the gravitation at a certain point on Earth depends on the local density of the Earth's crust. The longer the Bose-Einstein condensate expands, i.e. the longer it floats in zero gravity, the clearer these differences make themselves felt as it expands. With the experiment in the drop tower alone, the researchers extended the time available for a measurement by more than tenfold when compared to a laboratory experiment. This could help in the future to drastically improve the accuracy of measurement data.

The differences can be measured in an atom interferometer: A quantum gas, that is the wave-packet of matter, is split into two parts and moves in the gravitational field along different paths through space-time. Gravitation behaves like an optical medium, whose refractive index refracts the waves. As soon as the two parts reunite, there is interference, as is also generated when waves on a water surface run into each other. The interference pattern depends on how differently the two matter waves expand. If matter waves of different composition are compared, a test of the equivalence principle with matter waves is performed. The physicists in Ernst Maria Rasel’s group now want to construct such an atom interferometer for the capsule of the Bremen drop tower.

"Ultimately, we would like to perform such experiments in space," says Ernst Maria Rasel. The equivalence principle could also be tested there. To this end, the researchers must drop clouds of different atoms to Earth for as long as possible. They could then find out whether all bodies really fall with the same speed. And the longer the atom clouds remain in zero gravity - that is, the further they fall - the more chance there is of clarifying this.