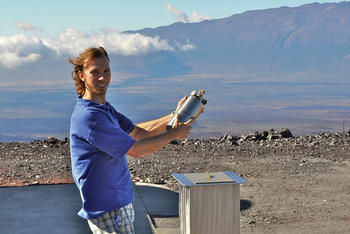 Aidan Colton at NOAAs Mauna Loa Observatory demonstrates how flask samples were filled at the site. Air collected year-round at nine remote sites around the world has been analyzed for the industrial solvent methyl chloroform. Variability in the decay of this chemical has helped scientists understand the cleansing power of the global atmosphere and its sensitivity to natural and human-induced perturbations.

The earth's atmosphere is less sensitive to pollutants than some researchers previously thought. An international team of researchers, including scientists from the Max Planck Institute for Chemistry in Mainz, has found that the concentration of hydroxyl radicals in the atmosphere has changed little in recent years. Hydroxyl radicals clean the air by breaking down organic substances such as climate-damaging methane. Because this self-cleaning capacity has scarcely varied over the past few years, the researchers believe that it is only marginally affected by environmental changes. These findings refute the view held by other scientists who believed that the atmosphere is very sensitive to air pollutants.

We now have a clearer picture of how the atmosphere cleanses itself of air pollution and harmful gases. With their recent study, an international team headed by scientists from the National Oceanic and Atmospheric Administration (NOAA) in the U.S. and the Max Planck Institute for Chemistry in Germany have made an important contribution to our understanding of this process. According to the study, the global amount of hydroxyl radicals in the air varies by just a few percent from year to year. Some researchers believed that it varies by up to 25 %.

Hydroxyl radicals are a key component of the self-cleaning capacity of the atmosphere, as they rid the air of many dangerous pollutants. They oxidize hydrocarbons, including the greenhouse gas methane and emissions from industry and transport, and make them water-soluble so that they can be removed from the atmosphere by rainfall.

However for many years it was unclear how well the atmosphere could actually oxidize pollutants. Some studies gave rise to alarming conclusions, suggesting that this cleaning capacity was very sensitive to environmental changes. "We now know that this vital feature of our atmosphere, the ability to cleanse itself of pollutants, is in fact very stable," says Steve Montzka, head author of the study and researcher at the National Oceanic and Atmospheric Administration NOAA.

"Although we predicted that the self-cleaning capacity is well buffered, we were only able to prove it through years of systematic measurements and advanced modelling techniques," says Jos Lelieveld, director of the Max Planck Institute for Chemistry and initiator of the study. "Our findings will make predictions about the climate and global air quality more reliable, because we can now better describe the composition of the atmosphere with the aid of computer models."

A hydroxyl radical consists of one hydrogen atom and one oxygen atom. These molecules usually form as the result of a reaction of sunlight with water molecules and ozone. However hydroxyl is also recycled by a number of chemical reactions, with the result that its concentration remains stable. In the atmosphere, these radicals are present in extremely low concentrations. They are formed quickly but also degraded on average within one second because they react quickly with other molecules. This makes it very difficult to determine their concentration accurately.

However, in the 1980s and 1990s this method produced widely varying estimates that gave rise to serious concerns. High fluctuations in free radical levels would imply that the self-cleaning ability of the atmosphere is very sensitive to natural or man-made atmospheric changes. In fact, the reason for the different results obtained for hydroxyl concentration was the prolonged, difficult-to-estimate emissions of methyl chloroform.

The production of methyl chloroform came to an end in the mid-1990s as a result of the Montreal Protocol on the protection of the ozone layer. As researchers no longer had to take new emissions into account, they could assume that the existing methyl chloroform was being continually degraded. Thus, they could determine the amount of hydroxyl in the atmosphere much more accurately.

Between 1998 and 2008 the team measured the concentration of methyl chloroform once a week at nine different locations, mostly remote islands and coastal stations where local air pollution is negligible. These measurements were part of NOAA's collaborative air sampling program. Using this data and with the help of modelling systems, researchers at the Max Planck Institute for Chemistry and the University of Wageningen in the Netherlands were able to calculate the global amount of methyl chloroform.

The study brought to an end the prolonged and heated scientific debate over the self-cleaning capacity of the atmosphere. "It's satisfying to finally resolve scientific questions," comments Lelieveld, with reference to the publication of the results in the magazine Science. "But even if we now have one less concern regarding our environment, we should still do everything we can to minimize emissions of greenhouse gases and pollutants. This is the only way we can protect our atmosphere and prevent further climate change.