A highway for spin waves 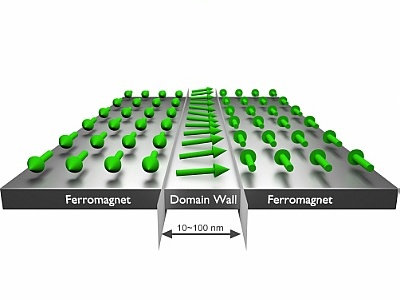 The spin wave remains trapped in the domain wall, which is formed in the middle between the differently oriented magnetizations. Researchers at the HZDR could thus control its propagation purposefully.

The success story of information processing by way of moving electrons is slowly coming to an end. The trend towards more and more compact chips constitutes a major challenge for manufacturers, since the increasing miniaturization creates partly unsolvable physical problems. This is why magnetic spin waves could be the future: they are faster than electronic charge carriers and use less power. Researchers at the Helmholtz-Zentrum Dresden-Rossendorf (HZDR) and TU Dresden have developed a method for controlling the propagation of these information carriers at the nanolevel in a targeted and simple way; so far, this required a lot of power. They have thus created a basis for nanocircuits that use spin waves.

"Our current information processing is based on electrons," explains Dr. Helmut Schultheiß from the HZDR's Institute of Ion Beam Physics and Materials Research. "These charged particles flow through the wires, creating electric currents. Yet in the process they collide with atoms and lose energy, which escapes into the crystal lattice in the form of heat. This means that chips get all the warmer, the closer the elements on them are grouped together. Eventually they fail, because the heat cannot be conveyed anymore." This is why Schultheiß, head of an Emmy Noether Junior Research Group, pursues a different approach: information transport via spin waves, also known as magnons.

The magnetic moment of electrons

Spin is the term scientists use to describe the angular momentum of electrons revolving around their own axis. It makes the electric particles behave like extremely small magnets. This is why they align in a parallel manner in ferromagnetic materials. "If one guides a spin in a different direction, this will have an impact also on the neighboring spins," Schultheiß explains. "This creates a spin wave that travels through the solid body. It can be used to transport and process information just like flowing charge carriers." However, the electrons themselves do not move in this case. "They do not collide with anything and therefore generate hardly any heat."

Yet in order to prevail in the race for future information processing methods, systems are needed that allow for controlling the propagation of spin waves at the nanolevel. "So far, approaches to a solution were based either on geometrically predefined conductor paths or on the permanent use of external magnetic fields," says Schultheiß, explaining the current state of research. "In the case of the first solution, the propagation path cannot be changed; however this is necessary for the development of flexible circuits. The second method solves that problem, yet at the price of an enormous increase in power consumption."

The scientists have successfully developed a new procedure for the targeted steering of spin waves by utilizing basic magnetic characteristics: remanence, that is, the residual magnetism that a solid body retains after the removal of a magnetic field, and the formation of so-called domain walls. "This term denotes the area in solid bodies where differently aligned magnetic domains meet," Schultheiß explains. The HZDR researchers created such a domain wall within a nickel-iron alloy nanostructure in an experiment. They then triggered a spin wave using microwaves. As their tests have shown, the spin waves of a certain frequency got stuck in the domain wall, because the different magnetic domains act as barriers. "In a sense, one could say that we created a road with a crash barrier along which the spin waves travel in a controlled manner," Schultheiß cheerfully describes the result.

However, the Dresden physicists were able to celebrate yet another success. They manipulated the course of the domain wall by way of small external magnetic fields of far below one millitesla, about one hundred times weaker than a commercial horseshoe magnet. In doing so, they likewise manipulated the propagation of the spin waves. "This could be the basis for a design of reconfigurable nanocircuits that uses magnons," Schultheiß says, sizing up the options. Even so, the researcher thinks that several years are likely to pass before application. "We are still in the basic research phase. However, our results reveal that we are onto a good thing."