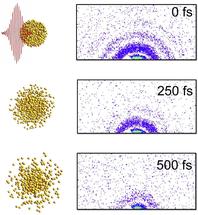 Three states of an exploding xenon nanoparticle. The ultra short flashes of the X-ray laser record these states as a so-called diffraction pattern. From these, the state of the sample can be calculated.

Using a super X-ray microscope, an international research team has “filmed” the explosion of single nanoparticles. The team led by Tais Gorkhover from Technische Universität Berlin, currently working at the SLAC National Accelerator Laboratory in the U.S. as a fellow of the Volkswagen Foundation, and Christoph Bostedt from the Argonne National Laboratory and Northwestern University has managed to combine a temporal resolution of 100 femtoseconds and a spatial resolution of eight nanometres for the first time. A nanometre is a billionth of a metre, and a femtosecond is a mere quadrillionth of a second. For their experiments, the scientists used the so-called free-electron X-ray laser LCLS at SLAC. The exposure time of the individual images was so short that the rapidly moving particles in the gas phase appeared frozen in time. Therefore, they did not have to be fixed on substrates as it is commonly done in other microscopy approaches. The team, including researchers from the Center for Free-Electron Laser Science CFEL at DESY, reports its results in the scientific journal Nature Photonics.

Most imaging approaches are severely limited when a combination of high spatial resolution and extreme shutter speed is required. Ultrafast optical approaches have a rather coarse resolution due to the long wavelength. Conversely, electron microscopy can yield ultrahigh resolution but demands a rather long exposure time and it requires the particles being fixed to substrates. Therefore ultrafast processes in free nanometre-sized particles cannot be directly imaged with conventional methods. However, the ability to image and understand the dynamics in nanostructures and aggregates is of relevance in many fields, ranging from climate models to nanotechnology.

The properties and dynamics of nanoparticles can significantly change when they are deposited on a substrate. To avoid any modification, the particles, made of frozen xenon and with a diameter of around 40 nanometres, were imaged during their flight through a vacuum chamber. “Using the intense light of an infrared laser, the nanoparticles where superheated and exploded,” explains DESY scientist Jochen Küpper, who is also a professor at the University of Hamburg and a member of the Hamburg Centre for Ultrafast Imaging (CUI). The explosion was imaged with ultrafast X-ray flashes at different time steps. Küpper's group helped to implement this so-called pump-probe technique. “The experiment was repeated over and over with a new nanoparticle every time and slightly increased delay of the X-ray flash,” reports Lotte Holmegaard from Küpper's CFEL group. Subsequently the images were assembled to a „movie“.

„To our big surprise the exploding particles appeared to be shrinking with time instead of expanding as intuitively expected“ says Gorkhover. This unexpected result could be explained with theoretical models that describe the explosion as a melting process starting on the surface instead of a homogenous expansion. In this process, the solid part of the particle's core gets smaller and smaller what causes the illusion of a shrinking particle.

Another very interesting aspect of this new imaging approach is that it is possible to directly image the dynamics in single, free nanoparticles. Most time resolved studies are based on ensembles of many particles and averaging statements in which some important differences such as size and shapes of the particles get lost. “We have already demonstrated the importance to look at one particle at a time in earlier static experiments. Now this approach is also available for time-resolved studies,” says Gorkhover.

“Our experiments yield unprecedented insight into the non-equilibrium physics of superheated nanoparticles. Moreover, they open the door for a multitude of new experiments where the ultrafast dynamics of small samples is important.“ explains Bostedt. Such dynamics may be of relevance in the formation of aerosols which are of major importance in climate models as they are in a large part responsible for absorption and reflection of sunlight. They may also be interesting for research on laser driven fusion in small targets or the rapidly developing area of nanoplasmonics in which the properties of nanoparticles are manipulated with intense light fields.