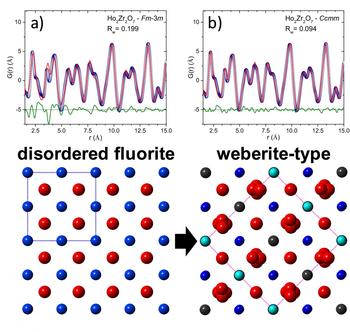 Defect fluorite materials such as Ho2Zr2O7 have been previously characterized as having a disordered cubic structure when sampled over many unit cell repeats. However, (a) pair distribution functions obtained from neutron total scattering reveals that description is inaccurate at the sub-nanometer level. Instead, (b) the local structure can be accurately modeled with an orthorhombic, weberite-type configuration revealing a complex disordering mechanism in these oxides, operating over different length scales.

A study led by the University of Tennessee and the Department of Energy’s Oak Ridge National Laboratory could soon pay dividends in the development of materials with energy-related applications.

The materials, each consisting of two or more positively charged metal ions and oxygen, are used in a wide range of applications including fast ion conductors in solid oxide fuel cells, host materials for nuclear waste containment, and thermal barrier coatings for gas turbine jet engines.

For their study, the team used state-of-the-art neutron characterization techniques to gain a detailed understanding and new insights into the nature of the atomic motifs in these materials.

“The complex oxides we analyzed in this study—pyrochlore and spinel—have been investigated for decades by different researchers,” said Lang. “When subjected to extreme environments such as high temperatures or high-energy radiation, many of these compounds partially lose their long-range crystal structure, and the multiple cations were thought to randomly exchange crystal sites.”

With the help of SNS instrument scientists Mikhail Feygenson and Joerg Neuefeind, Lang and his team used the Nanoscale-Ordered Materials Diffractometer (NOMAD) for an in-depth look at the local crystal structure of their samples—a NOMAD first for neutron scattering experiments on ion-irradiated materials.

Neutrons are indispensable for this type of study because they can accurately detect the position of oxygen atoms present in materials.

“Using neutrons to measure samples of such small sizes would have been difficult, if not impossible, just a few years ago,” said Feygenson. “However, with the combination of the high neutron flux of SNS and the wide detector coverage of the NOMAD instrument, scientists can look at very small samples, which are typically the domain of X-ray scattering experiments.”

Data analysis from NOMAD revealed the cations and oxygens in the materials are not randomly arranged at the atomic level but only appear so when sampling over longer scales, a key discovery.

Lang said the heterogeneous disorder was unexpected but seems to be a general phenomenon for many other materials functioning in harsh conditions. He said the new insight into disorder is fundamental to controlling oxygen mobility and phonon transport in complex oxides, a critical aspect for technological applications.

By gaining a better understanding of such materials, the team could help improve and control performance across a range of technologies—containment and immobilization of nuclear waste being a prime example.

“This ability to accommodate atomic disorder in their structure accounts for the tendency of some compositions to resist becoming fully amorphous under irradiation or at high temperatures,” Lang said. “Such materials find application as host materials for immobilizing actinides, such as plutonium.

“Predicting transport of radionuclides is important for their safe use as nuclear waste forms and requires a detailed knowledge of how the atomic structure responds to self-irradiation.”

Lang said the team’s data will provide much needed atomic-scale information from the initial local defect structure to the long-range observable material modifications so that waste form properties and degradation can be accurately simulated.