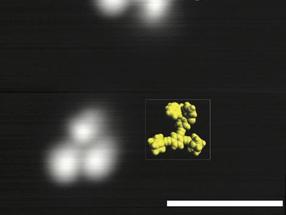 A scanning tunneling microscope image shows two three-wheeled nanoroadsters created at Rice University and tested at the University of Graz. The light-activated roadsters, next to their molecular models, reached a top speed of 23 nanometers per hour. 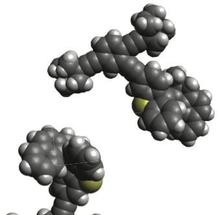 Computer models show two possible forms of the single-molecule, three-wheeled nanoroadster created by scientists at Rice University and the University of Graz. The vehicle runs on a light-powered motor that won its inventor a Nobel Prize this year. 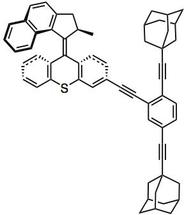 The three-wheeled nanoroadster synthesized at Rice University contains 112 atoms and includes a molecular motor that earned its Netherlands inventor a Nobel Prize this year.

Scientists at Rice University and at the University of Graz, Austria, are driving three-wheeled, single-molecule "nanoroadsters" with light and, for the first time, seeing how they move.

The Rice lab of nanocar inventor and chemist James Tour synthesized light-driven nanocars six years ago, but with the aid of experimental physicists in Austria, they're now able to drive fleets of single-molecule vehicles at once.

"It is exciting to see that motorized nanoroadsters can be propelled by their light-activated motors," said Tour, who introduced nanocars in 2005 and motorized them a year later. "These three-wheelers are the first example of light-powered nanovehicles being observed to propel across a surface by any method, let alone by scanning tunneling microscopy."

Rather than drive them chemically or with the tip of a tunneling microscope, as they will do with other vehicles in the upcoming international NanoCar Race in Toulouse, France, the researchers used light at specific wavelengths to move their nanoroadsters along a copper surface. The vehicles have rear-wheel molecular motors that rotate in one direction when light hits them. The rotation propels the vehicle much like a paddle wheel on water.

The team led by Tour and Leonhard Grill, a professor at the University of Graz and formerly at the Fritz-Haber-Institute, Berlin, used wavelength-sensitive modified motors invented by Dutch scientist Bernard Feringa, who shared this year's Nobel Prize in chemistry for his molecular machine.

Remote control is key to the cars' useful abilities. "If we have to 'wire' the car to a power source, like an electron beam, we would lose a lot of the cars' functionality," Tour said. "Powering them with light frees them to be driven wherever one can shine a light -- and eventually we hope they will carry cargo."

Another advantage is the ability to activate fleets of nanocars at once. "This is precisely what we seek -- to use a light to activate motors and have swarms of nanovehicles moving across the surface, made directional through electric field gradients," Tour said. "This would permit us the future prospect of using nanomachines like ants that work collectively to perform construction."

Grill said remote control by light eliminates the need for a local probe that would have to address the molecules one by one. "Additionally, no 'fuel' molecules are required that would contaminate the surface and modify the diffusion properties," he said.

Tour has used modified Feringa's motors to power his lab's nanosubmersibles. In this case, the motor is the back wheel. He said the three-wheeled configuration simplifies its use because larger nanocars are more difficult to put onto an imaging surface and often dissociated during deposition under vacuum, according to Grill.

Experiments by lead author Alex Saywell of the Grill group on nanoroadsters made at Rice demonstrated a need for a fine balance of light and temperature to allow "enhanced diffusion" of the molecules in a vacuum.

Grill said using light to drive nanomachines offers a fundamental advantage -- the ability to selectively induce motion because of the motors' sensitivity to wavelength. Ultraviolet light at 266 nanometers doubled the roadsters' movement compared with "control" roadster molecules without motors. At 355 nanometers, it tripled.

The roadsters, made of 112 atoms, reached a top speed of 23 nanometers per hour.

A surface activation temperature of 161 kelvins (minus 170 degrees Fahrenheit) proved best for driving conditions. If the temperature is too cold, the roadsters would stick to the surface; too warm and they would diffuse randomly without help from the motor.

"We were surprised by the very clear correlation of the enhanced motion to the presence of the motor, the need for both heat and light to activate this motion -- in perfect agreement with the concept of the Feringa motor -- and the wavelength sensitivity that nicely fit our expectations from spectroscopy in solution," Grill said.