Watching the buildup of quantum superpositions 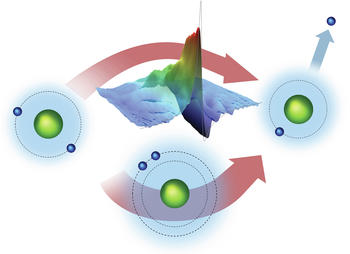 There are two different ways the helium atom can be ionized

It is definitely the most famous experiment in quantum physics: in the double slit experiment, a particle is fired onto a plate with two parallel slits, so there are two different paths on which the particle can reach the detector on the other side. Due to its quantum properties, the particle does not have to choose between these two possibilities, it can pass through both slits at the same time. Something quite similar can be observed when a helium atom is ionized with a laser beam.

Just like the two paths through the plate, the ionization of helium can happen via two different processes at the same time, and this leads to characteristic interference effects. In the case of the helium atom, they are called "Fano resonances". A team of scientists from TU Wien (Vienna, Austria), the Max-Planck Institute for Nuclear Physics in Heidelberg (Germany) and Kansas State University (USA) has now managed to observe the buildup up of these Fano resonances -- even though this effect takes place on a time scale of femtoseconds.

The experiment was performed in Heidelberg, the original proposal for such an experiment and computer simulations were developed by the team from Vienna, additional theoretical calculations came from Kansas State University.

When a laser pulse transfers enough energy to one of the electrons in the helium atom, the electron is ripped out of the atom right away.

There is, however, another way to ionize the helium atom, which is a little bit more complex, as Professor Joachim Burgdörfer (TU Wien) explains: "If at first the laser lifts both electrons to a state of higher energy, one of the electrons may return into the state of lower energy. Part of this electron's energy is transferred to the second electron, which can then leave the helium atom."

The outcome of these two processes is exactly the same - both turn the neutral helium atom into an ion with one remaining electron. From this perspective, they are fundamentally indistinguishable.

"According to the laws of quantum physics, each atom can undergo both processes at the same time", says Renate Pazourek (TU Wien). "And this combination of paths leaves us characteristic traces that can be detected." Analyzing the light absorbed by the helium atoms, so-called Fano resonances are found - an unmistakable sign that the final state was reached via two different paths.

This can also be prevented. During the ionization process, the indirect path can be effectively switched off with a second laser beam so that only the other path remains open and the Fano-resonance disappears.

This opens up a new possibility of studying the time evolution of this process. At first, the atom is allowed to follow both paths simultaneously. After some time, the indirect path is blocked. Depending on how long the system was allowed to access both paths, the Fano-resonance becomes more or less distinct.

"Fano resonances have been observed in a wide variety of physical systems, they play an important role in atomic physics", says Stefan Donsa (TU Wien). "For the first time, it is now possible to control these resonances and to show precisely, how they build up within femtoseconds." "These quantum effects are so fast that on our usual time scales they appear to happen instantaneously, from one moment to the next", says Stefan Nagele. "Only by employing new sophisticated methods of attosecond physics it has become possible to study the time evolution of these processes."

This does not only help quantum scientists to understand the fundamental theory of important quantum effects, it also opens up new possibilities of controlling such processes -- for example facilitating or inhibiting chemical reactions.