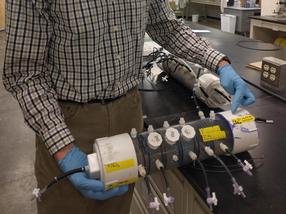 Colorado State University Research Assistant Professor Jens Blotevogel is with a reactor setup for testing chemicals in the lab.

They're in stain-resistant carpet, paint, permanent markers, food packaging and firefighting foam. Perfluorinated compounds (PFCs), a broad class of manufactured chemicals, touch every corner of the industrialized world. They're impervious to traditional remediation strategies, and when they're ingested in large quantities, like in contaminated drinking water, they may be dangerous to human health.

Colorado State University environmental engineers are testing a promising new way to clean up PFCs, supported by the Department of Defense's Strategic Environmental Research and Development Program. Jens Blotevogel, research assistant professor in the Department of Civil and Environmental Engineering and co-director of the Center for Contaminant Hydrology, has received a three-year, $578,000 grant to tackle this ubiquitous problem.

Blotevogel's team will test an electrolysis-based technology for treating groundwater tainted with PFCs. The method harnesses electricity-induced chemical reactions in the groundwater to transform the organic compounds, and other contaminants that may be present, into carbon dioxide, fluoride and other benign substances.

"Perfluorinated compounds are challenging on every level ­- how you detect them, how you work with them in the lab, how they accumulate in our bodies and exert their toxicity, and how you break them down, if you can at all," Blotevogel said. "You can hardly go anywhere on this planet without being exposed to PFCs."

Remediation methods for PFCs in groundwater are sorely lacking, Blotevogel said. Traditional strategies like membrane filtration or carbon sorption can be effective, but they're not really solving the problem - just moving the contaminants to another location.

Why are PFCs so hard to get rid of? A quick chemistry lesson: Perfluorinated compounds are molecules that contain chains of carbon and fluorine atoms. The carbon-fluorine covalent bond is among the strongest in nature, which is why these molecules live on for decades in soil, water and air. The longer the carbon chain on the molecule, the more resistant the molecule is to biodegradation. Longer-chain PFC molecules called "C8" compounds - eight carbon atoms - such as PFOA (perfluorooctanoic acid) and PFOS (perfluorooctanesulfonic acid), have been banned or phased out of manufacturing.

In this sense, PFCs are victims of their own success. Their chemical stability and surfactant properties make them ideally suited for firefighting, for example, in what the industry calls aqueous film-forming foams. The slippery, foamy substance is the same material in a kitchen fire extinguisher, and used in large quantities in firefighter training and the oil industry. Over many decades, pollution from these foams have found their way into groundwater.

Also in recent months, groundwater in and around Colorado Springs was found to have high levels of PFCs, raising alarm bells among public health officials.

The only true remediation of PFCs would come in a complete chemical change that breaks the strong molecular bonds. Blotevogel's team is testing a technology that his collaborators have developed over the last several years, called electrolytic barriers.

The team will use laboratory reactors to test novel tin oxide-based mesh barriers that look like window screens flanked by solar-powered, direct-current-inducing electrodes. The mesh barriers are inserted into flowing groundwater, and as the water naturally flows through the charged barriers, contaminants are broken into their harmless constituent parts.

"This is a green technology," Blotevogel said. "You basically walk away and wait for the contaminants to be transported through the mesh."

The barriers should also be able to treat other persistent contaminants such as 1,4-dioxane, which are often found alongside PFCs.

Sale and colleagues previously field-tested this technology on other chemicals. For this project, the team will also tap the expertise of CSU materials scientist Jamie Neilson, assistant professor of chemistry, who will help Blotevogel's team increase the reliability and durability of the mesh for field applications.

In later phases of the project, they will test the barriers in conjunction with bacterial and fungal colonies that have been found to neutralize dioxane contamination, pioneered by Mahendra's lab at UCLA. The researchers expect that the electrochemistry and the bacterial and fungal methods, taken together, will effectively treat PFC-contaminated groundwater.

Such a result could lead to game-changing technologies for environmental cleanup.

Other researchers around the state have been awarded SERDP funding to research PFC cleanup, including Christopher Higgins at Colorado School of Mines, who studies environmental transport of PFCs and other chemicals.