Ultrathin material for water splitting made of non-precious metals 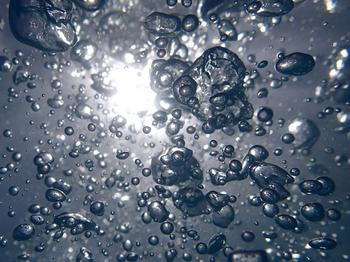 The technology is based on the creation of ultrathin slices of porous metal-organic complex materials coated onto a foam electrode, which the researchers have unexpectedly shown is highly conductive of electricity and active for splitting water.

"Our fabrication method is simple and universal, so we can adapt it to produce ultrathin nanosheet arrays of a variety of these materials, called metal-organic frameworks.

"Compared to other water-splitting electro-catalysts reported to date, our catalyst is also among the most efficient," he says.

Hydrogen is a very good carrier for renewable energy because it is abundant, generates zero emissions, and is much easier to store than other energy sources, like solar or wind energy.

But the cost of producing it by using electricity to split water is high, because the most efficient catalysts developed so far are often made with precious metals, like platinum, ruthenium and iridium.

The catalysts developed at UNSW are made of abundant, non-precious metals like nickel, iron and copper. They belong to a family of versatile porous materials called metal organic frameworks, which have a wide variety of other potential applications.

Until now, metal-organic frameworks were considered poor conductors and not very useful for electrochemical reactions. Conventionally, they are made in the form of bulk powders, with their catalytic sites deeply embedded inside the pores of the material, where it is difficult for the water to reach.

By creating nanometre-thick arrays of metal-organic frameworks, Zhao's team was able to expose the pores and increase the surface area for electrical contact with the water.

"With nanoengineering, we made a unique metal-organic framework structure that solves the big problems of conductivity, and access to active sites," says Zhao.

"It is ground-breaking. We were able to demonstrate that metal-organic frameworks can be highly conductive, challenging the common concept of these materials as inert electro-catalysts."

Metal-organic frameworks have potential for a large range of applications, including fuel storage, drug delivery, and carbon capture. The UNSW team's demonstration that they can also be highly conductive introduces a host of new applications for this class of material beyond electro-catalysis.