An ultradilute quantum liquid made from ultra-cold atoms 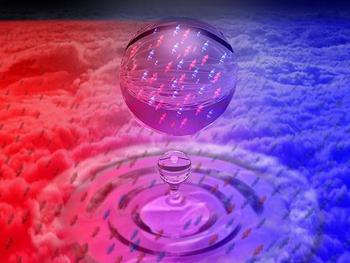 Liquids and gases are two different phases of matter that are part of our everyday life. While gases are dilute, compressible and take the size of their container, liquids are dense, have a fixed volume and in small quantities form droplets. These are ensembles of particles that remain bound by themselves, and have a free surface that separates them from the environment. By increasing the temperature, one can induce a phase transition between liquid and gas. This is exactly what happens when we boil water in a pan.

To this aim, the team cooled down a gas of potassium atoms to -273.15 degrees Celsius, very close to the absolute zero. Although at these temperatures the atoms behave as waves and follow the rules of quantum mechanics, they still conserve an intrinsic property of a gas: they expand in the absence of container. In contrast, when two of such gases are mixed together and attract each other, the atoms instead form liquid droplets. As Cesar Cabrera, first author of the study, explains: "in many aspects, our potassium droplets are very similar to those of water: they have their own size and shape, regardless of where we put them, but they are much colder and their properties are quantum".

Indeed, the existence of these liquid droplets is entirely due to quantum fluctuations, a fascinating intrinsic quantum effect. Furthermore, due to quantum mechanics the atoms forming a droplet cannot stay completely at rest inside it: this is forbidden by Heisenberg's uncertainty principle. They thus remain in perpetual motion, leading to a quantum pressure that makes very small droplets unstable and evaporates them into an expanding gas. Prof. Leticia Tarruell comments: "These droplets are fascinating macroscopic objects: even if they are made up of thousands of particles, their behavior is still fully determined by quantum fluctuations and correlations. By observing the phase transition between liquid and gas, we measure very precisely these surprising quantum effects".

The unique combination of diluteness and "quantumness" makes quantum liquid droplets an ideal testbed to better understand quantum systems made of many interacting particles, and comprehend features they share with liquid Helium, neutron stars or other complex materials.