Mini-Spectrometers - From the smallest component to the dedicated measurement system
20-Mar-2018 - University of California, Davis 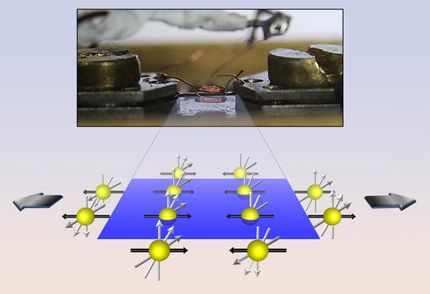 Top: A piece of BaFe2As2 is stretched while magnetic measurements are taken (the copper wire coil is part of the NMR device). Lower diagram shows atoms in a plane, with black arrows showing how magnetic spins lie in plane and point in opposite directions. Grey arrows show how the magnetic spin of atoms shifts as the material is stretched.

Piezoelectric materials, which generate an electric current when compressed or stretched, are familiar and widely used: think of lighters that spark when you press a switch, but also microphones, sensors, motors and all kinds of other devices. Now a group of physicists has found a material with a similar property, but for magnetism. This "piezomagnetic" material changes its magnetic properties when put under mechanical strain.

Curro and colleagues were studying a barium-iron-arsenic compound, BaFe2As2, that can act as a superconductor at temperatures of about 25 Kelvin when doped with small amounts of other elements. This type of iron-based superconductor is interesting because although it has to be kept pretty cold to work, it could be stretched into wires or cables.

BaFe2As2 is what is called a "nematic" crystal because its structure goes through a phase transition before it becomes superconducting. In the case of BaFe2As2, its crystal structure goes from a square to a rectangular configuration.

Curro and graduate students Tanat Kissikov and Matthew Lawson were attempting to study the material by nuclear magnetic resonance (NMR) imaging while stretching it, to see if they could force it into the rectangular configuration. To their surprise, the magnetic properties of BaFe2As2 changed as they stretched it.

The material is not a bulk magnet - the spins of its atoms point in alternating opposite directions, making it an antiferromagnet. But the direction of those magnetic spins does change in a measurable way when under stress, they found.

"The real surprise is that it appears that the direction of magnetism can change and come out of plane," Curro said.

At this point, there's no theory to explain these results, Curro said. His lab is looking to see if other materials can show the same behavior and if mechanical strain can affect the superconducting properties of the material (these experiments were not carried out at temperatures where BaFe2As2 is a superconductor).

The discovery could have applications in new ways to look for strain within materials such as aircraft components, Curro said.