First synthesis of a cationic tetrahedral cluster in solution 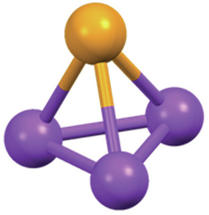 Tetrahedral cluster are four-atom molecules whose spatial arrangement corresponds to a tetrahedron of equilateral triangles.

Main-group atoms often occur in small clusters, which can be neutral, negative or positive charged. The best known neutral cluster-tetrahedron is white phosphorus (P4), but other tetrahedra can also be isolated. They are four-atom molecules whose spatial arrangement corresponds to a tetrahedron of equilateral triangles. Up to now, scientists only knew of at least six neutral versions, such as As4 and AsP3, and a large number of negatively charged tetrahedra like In2Sb22– - but no cationic or positively charged variants. Now, a team led by Prof. Dr. Ingo Krossing from the Institute of Inorganic and Analytical Chemistry at the University of Freiburg has succeeded in producing positively charged tetrahedra: three of them, to be precise: P3E+ (E = S, Se, Te), were studied in solution.

The Freiburg chemists were able to produce the tetrahedra in mixtures in the condensed phase. The analysis by NMR spectroscopy and MS spectrometry was clear, explains Krossing, and left no doubt that the compounds were P3E+, with E being S, Se and Te. By reacting the P4 tetrahedron with the cations ECl3+ (E = S, Se, Te), the researchers were able to obtain P3E+ salts with very good, weakly coordinating anions. And for the first time, this provided access to very Lewis-acidic ECl3+ salts that can be easily dissolved in organic solvents and thus are ideally suited for follow-up chemistry.

The team is now looking for more synthetic possibilities: "We have ideas to continue and work with, but that will take some time," Krossing says.