Taking an X-ray of an atomic bond 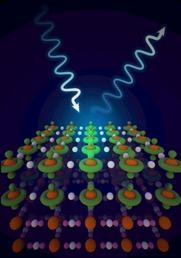 Understanding the behavior of materials at their interfaces - where they connect to and interact with other materials - is central to engineering a variety of devices used to process, store and transfer information. Devices such as transistors, magnetic memory and lasers could all improve as researchers delve into the nature of these bonds, which affect the materials' properties of conductivity and magnetism.

In this effort, Steven May, PhD, and his colleagues from Drexel University's College of Engineering, along with researchers from the University of Saskatchewan and Lawrence Berkeley, Brookhaven and Argonne National Labs have recently demonstrated a new approach for examining - with atomic-layer precision - changes in the behavior of electrons at the interfaces between two materials.

In particular, the approach provides a glimpse into how the degree of covalent and ionic bonding between metal and oxygen atoms is altered in moving from one material to the next.

The demonstration of this method, which was recently published in the journal Advanced Materials, provides scientists with a powerful resource for unlocking the potential of engineering materials at the atomic level.

"These interfaces can impart new functionality into the material stacks, but directly studying how the properties of electrons at the interfaces differ from the non-interfacial electrons requires techniques that can spatially resolve properties across individual atomic layers," said May, a professor in the Department of Materials Science and Engineering at Drexel. "For example, a measurement of a material's conductivity provides information on its average ability to conduct electricity but doesn't reveal differences between how the electrons are behaving at the interfaces and away from the interfaces."

Ionic and covalent bonding is a central concept in materials science that describes how atoms are held together to form solid materials. In an ionic bond, electrons from one atom are transferred to another atom. The attraction between the resulting positively charged ion - cation - and negatively charged ion - anion - is what draws the atoms together, thus creating a bond. Conversely, a covalent bond forms when two atoms share their electrons with each other - instead of fully transferring them.

Understanding electron behavior in an atomic bond is an important factor to understanding or predicting the behavior of materials. For example, materials with ionic bonds tend to be insulators that block the flow of electricity; while materials with covalent bonds can be electrically conductive.

But many materials contain bonds that are best described as a mixture of ionic and covalent. In those materials, the degree to which the bond is ionic or covalent strongly influences its electronic properties.

"The details of this mixture depend on what electron orbitals the highest energy electrons - those that form the bonds - come from," May said. "The orbital character of these electrons, in turn, has profound effects on their electronic and magnetic behavior. While scientists have developed computational approaches to describe how covalent or ionic a bond is, experimentally measuring how the orbital character of electrons or the changes in covalency across interfaces remains a significant challenge in materials research."

The team's approach for making this experimental measurement involves a technique called resonant x-ray reflectivity. Experiments like this can only be conducted in the large synchrotron x-ray facilities, such as those operated by the U.S. Department of Energy. These massive laboratories generate x-ray radiation to probe the structure of materials.

In a reflectivity experiment, researchers analyze the pattern of x-rays that are scattered from the material to understand the relative electron density within a material. The reflectivity data can be used to determine the concentration of electrons, in relation to their distance from the surface of the material.

By tuning the wavelength of the x-rays to excite electronic transitions specific to individual elements in the material stack, the team was able to measure each element's electron contributions to their shared bond - thus, revealing how ionic or covalent the bond is.

"This is something like how climatologists would use ice-core samples to analyze the chemical makeup of each layer as a function of depth from the surface," May said. "We can do the same thing at the atomic scale using x-ray reflectivity. But the information we're obtaining tells us about the orbital character of electrons and how this changes from one atomic layer to the next."

The materials used in the study are composed of alternating layers of two transition metal oxide compounds - strontium ferrite and calcium ferrite. These materials are of interest because they exhibit many of the exotic electronic behaviors found in quantum materials, including changing from metallic to insulating states as they cool.

At the heart of these materials' unusual properties is the iron-oxygen bond. Theory predicts that the bond in this material is much more covalent than typical iron-oxygen bonds, which tend to be quite ionic in most iron-containing compounds.

Using the x-ray reflectivity approach, the team was able to measure - for the first time - how the oxygen and iron contributions to the electronic character differs in the layers and at the interface of the two compounds.

"By individually probing the electron density of the oxygen states and the iron states, we could determine the degree of covalency between iron and oxygen across these oxide interfaces at the atomic scale," said Paul Rogge, PhD, a postdoctoral researcher at Drexel who is the first author on the paper. "We were surprised to find a dramatic change in covalency between the materials because their individual electronic structures are very similar, but by interfacing thin films of these two materials we can tweak their physical structure and thus alter their atomic bonding, which ultimately affects their electronic and magnetic properties."

Understanding how unusual material interfaces, like those of quantum materials, function could be the first step toward harnessing their properties to improve the processing power, storage and communications capabilities of electronic devices.

"Moving forward, we are excited about applying this technique to other classes of quantum materials, such as topological insulators and semimetals, to gain new insights into how interfaces alter magnetic and electronic character in those materials," May said. "Because the majority of electronic and magnetic devices rely on interfaces to operate, having a deep understanding of how electrons behave at interfaces is critical for the design of future electronic technologies."