When metal flows like liquid glass: a technology for producing superplastic wire is proposed 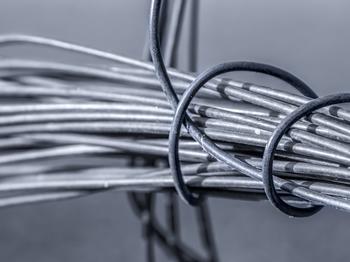 For example, conductive aluminium alloys must have both high electrical conductivity and strength, and sometimes also long term thermal stability, if they are to be used in conditions of long term exposure to certain temperatures. Typically, high strength and thermal stability of aluminium alloys is provided by means of complex alloying, which leads to a sharp decrease in electrical conductivity of the materials.

In 2017, a research team of the Physics and Technology Research Institute at Lobachevsky University in Nizhny Novgorod, on the initiative of the Moscow Plant for Special Alloys Processing, took up the task of improving the performance of aluminium alloys. To obtain new low-alloy aluminium alloys, Nizhny Novgorod researchers used the technology of induction casting in vacuum.

According to Professor Alexey Nokhrin, Head of the Materials Diagnostics Laboratory at the UNN Physics and Technology Research Institute, one of the main tasks was to develop the regimes of casting for new aluminium alloys.

"The structure of the cast metal is very heterogeneous, it has a needle-like dendrite structure and contains large particles that resulted from casting. Because of this, it is very difficult to form the cast metal. In order to achieve the required results, it was necessary first to determine very precisely the metal casting regimes that would help to get rid of large particles, and then, by using plastic deformation, to refine the cast dendrite structure. The second step was especially difficult, since it was not possible to process the alloy at elevated temperatures, as it is usually done at factories. An increase in temperature would have resulted in the precipitation of large particles, which would have caused the wire with a diameter of less than 0.5 mm to rupture", explains Alexey Nokhrin.

To solve the problem of obtaining thin wire, a large amount of research has been conducted by UNN scientists to study the effect of casting regimes on the homogeneity of the structure and properties of aluminium alloys containing magnesium and scandium microadditives. Intensive plastic deformation technologies, including equal channel angular pressing and rotary forging, were used as the key methods for controlling the structure of aluminium alloys.

As a result, a homogeneous highly plastic structure was obtained in the alloys where nanoparticles were formed by annealing, which provided the required level of strength and thermal resistance of the wires manufactured.

The new alloys have demonstrated a number of unique characteristics. Lobachevsky University researchers managed to solve the difficult task of increasing simultaneously electrical conductivity, strength and thermal resistance of the alloys while ensuring a very high level of plasticity at elevated temperatures.

The research shows that new alloys possess superplasticity: during tensile testing at 500 degrees Celsius and at high rates of deformation the samples showed the elongation of more than 1000%, and after cooling became very strong and electrically conductive again.

"This will allow the producers to manufactire the wire using the superplasticity regime, when special deformation mechanisms are activated and the metal "flows" like liquid glass", concludes Alexey Nokhrin.

At present, the team is working on the next stage of the project. The researchers are studying the possibilities of replacing expensive scandium with other alloying additives (Zr, Yb, etc.). The aim is to maintain high characteristics of the alloys produced while sharply reducing their cost.