Shall they go with the flow? 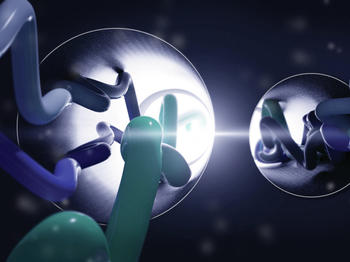 The diameter of pores changes the viscosity of polymer-based liquids and thus their flow behavior.

Printing with an ink-jet printer is part of daily life, but the same technology finds more complex applications in electronics and in protein separation. These applications, considered futuristic only few decades ago, rely on the quality of the printing process which depends on the flow of the "ink" through narrow pores. Researchers from the Max Planck Institute for Polymer Research have now revealed the microscopic mechanism governing this flow.

The flow of water in a pipe is mainly governed by the diameter of the pipe and the pressure at its in- and outlet. For narrow tubes, the liquid can still penetrate by capillary action but the physical laws governing the flow of the liquid mixture change dramatically This deviation becomes even more apparent when the liquid becomes more viscous and/or the interaction of the liquid with the channel's interior stronger.

Often the ink is a polymer － a very large molecule composed of many repeating units － in a liquid state. In principle, polymers do not like to enter nanopores because in confined space they lose their freedom for motion (entropy). However, they do so because of the capillary force that drags the chains. After the printing process is over these polymers quickly solidify, i.e. the ink dries.

In high precision printing applications, when resolution is a key factor, it becomes important to be able to "push" the “ink” through very narrow channels. But without previous experience, it is never sure whether a polymer will flow through a narrow pore, how and when it will do so, and what is the influence of the microscopic properties of the polymer and the pore characteristics on the flow. The group of George Floudas, professor at the University of Ioannina, Greece, and group leader at the Max Planck Institute for Polymer Research, Germany, uses advanced techniques to measure the polymer dynamics during flow and, therefore, can shed light on the actual process.

Surprisingly the researchers have observed that the presence of a channel not only restricts the flow, but also alters the physical properties of the flowing polymer. They found that a narrow pore can increase the polymer viscosity. This observation can be explained by two competing factors: on one side, the capillary force drags the chains into the pore thus helping the directional movement along the pores. On the other hand, the chains ability to "wiggle" decreases especially next to the pore surface, thus hindering its flow. This latter effect is a consequence of the strong interaction of the polymer with the pore surface. Taming the strength of interfacial interactions could help towards designing polymer interfaces with controlled physical properties.

“We hope that, in the future, our findings can be used in applications like printers or electronics so that the respective performance can be improved”, says George Floudas.