This is a real breakthrough in the field of phononics 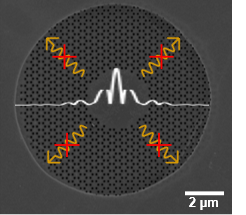 Electron microscopy shows the graphene sample (gray) in which the helium beam has created a hole pattern so that the density varies periodically. This results in the superposition of vibrational modes and the emergence of a mechanical band gap. The frequency of this phononic system can be adjusted between 50 MHz and 217 MHz by mechanical tension.

Technological innovation in the last century was mainly based on the control of electrons or photons. Now, in the emerging research field of phononics, phonons or vibrations of the crystal lattice attract attention. A team at Freie Universität Berlin and Helmholtz-Zentrum Berlin showed a graphene-based phononic crystal whose resonant frequency can be tuned over a broad range and has used a helium-ion microscope to produce such a crystal. This is a real breakthrough in the field of phononics, now published in Nano Letters.

Without electronics and photonics, there would be no computers, smartphones, sensors, or information and communication technologies. In the coming years, the new field of phononics may further expand these options. That field is concerned with understanding and controlling lattice vibrations (phonons) in solids. In order to realize phononic devices, however, lattice vibrations have to be controlled as precisely as commonly realized in the case of electrons or photons.

The key building block for such a device is a phononic crystal, an artificially fabricated structure in which properties such as stiffness, mass or mechanical stress vary periodically. Phononic devices are used as acoustic waveguides, phonon lenses, and vibration shields and may realize mechanical Qubits in the future. However, until now, these systems operated at fixed vibrational frequencies. It was not possible to change their vibrational modes in a controlled manner.

Now, for the first time, a team at Freie Universität Berlin and HZB has demonstrated this control. They used graphene, a form of carbon in which the carbon atoms interconnect two-dimensionally to form a flat honeycomb structure.  Using a focused beam of helium ions, the team was able to cut a periodic pattern of holes in the graphene. This method is available at CoreLab CCMS (Correlative Microscopy and Spectroscopy). "We had to optimize the process a lot to cut a regular pattern of holes in the graphene surface without touching neighbouring holes," Dr. Katja Höflich, group leader at Ferdinand-Braun-Institut Berlin and guest scientist at HZB, explains.

Jan N. Kirchhof, first author of the study now published in Nano Letters, calculated the vibrational properties of this phononic crystal. His simulations show that in a certain frequency range no vibrational modes are allowed. Analogues to the electronic band structure in solids, this region is a mechanical band gap. This band gap can be used to localize individual modes to shield them from the environment. What's special here: "The simulation shows that we can tune the phononic system quickly and selectively, from 50 megahertz to 217 megahertz, via applied mechanical pressure, induced by a gate voltage." says Jan Kirchhof.

"We hope that our results will push the field of phononics further. We expect to discover some fundamental physics and develop technologies that could lead to application in e.g. ultrasensitive photosensors or even quantum technologies” explains Prof. Kirill Bolotin, head of the FU working group. The first experiments on the new phononic crystals from HZB are already underway in his group.