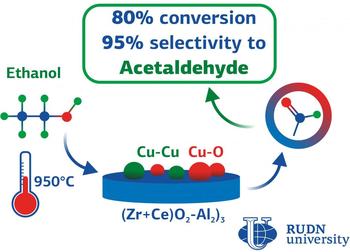 RUDN University chemists proposed a new way to synthesize catalysts for the conversion of ethyl alcohol. The obtained materials are promising catalysts for the selective conversion of ethanol, which is an important stage in the development of an alternative technology for obtaining valuable chemical synthesis products based on plant raw materials.

RUDN University chemists proposed a new way to synthesize catalysts for the conversion of ethyl alcohol. The obtained materials are promising catalysts for the selective conversion of ethanol, which is an important stage in the development of an alternative technology for obtaining valuable chemical synthesis products based on plant raw materials.

Ethanol fuel is ethyl alcohol, it is produced from plant material by fermentation of industrial or agricultural waste biomass. It is used as a more environmentally friendly fuel compared to gasoline. But this is not its sole use -- ethanol can be converted into acetaldehyde, diethyl ether and other chemicals that are in demand in the industry. Highly efficient catalysts are required to trigger such chemical reactions. However, existing catalysts contain precious metals, and therefore they are too expensive to use. RUDN University chemists proposed new catalysts based on aluminium and zirconium, modified with copper.

"The best-known catalysts for ethanol conversion are based on oxides promoted by noble metals. However, they are quite expensive. A more affordable option is catalysts with copper as the active phase, but so far, the best option has not been found among them. Improvements are required to use these catalysts to ensure both high conversion and selectivity of the reaction -- that is, to leave as little ethanol as possible unprocessed and at the same time to obtain the necessary substances, and not by-products", Anna Zhukova, associated professor, PhD, from the Department of Physical and Colloidal Chemistry of RUDN University

RUDN chemists combined two approaches to improve the efficiency of catalysts for acetaldehyde synthesis. First, they combined oxides of several metals in nanocomposites: aluminium, cerium, and zirconium. The researchers synthesized five types of powders with different oxides ratios. Five of them was prepared at a relatively low temperature of 180°C, and another five was heated to 950°C. This made it possible to form different structures in the materials. The calcined samples had a large diameter and pore volume.

The second idea was to add copper. All the powders were soaked in an aqueous solution of copper nitrate, dried at room temperature, and exposed to a flow of hydrogen at 400°C. After that, the finished catalysts were tested in the ethanol vapor dehydrogenation reaction. Chemists placed them in a thin layer on a porous filter, and then fed alcohol vapors in the helium flow. The reaction was carried out at temperatures from 240°C to 360°C.

"All obtained systems demonstrated high alcohol conversion and selectivity to acetaldehyde. The copper containing catalysts with 5% aluminium oxide produced significant amounts of acetaldehyde with selectivity above 80% at 3600C. We found that the mixed composition of the oxides creates conditions for the formation of active centres on the surface of the catalyst from copper ions with different charges. The best option is to use a mixture of oxides with a small content of aluminium in the synthesis of the catalyst and calcinate them at 950°C", Anna Zhukova from RUDN University.