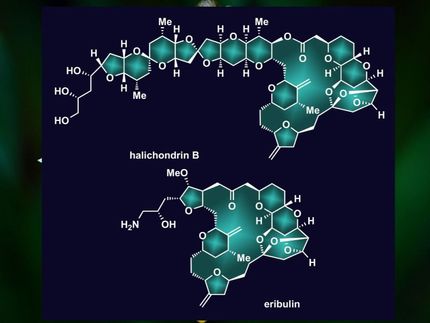 Rice University synthetic chemists have simplified the process to make halichondrin B, top, the parent compound of the successful cancer drug eribulin, bottom. Their reverse synthesis reduced the number of steps required to make the natural product.

The story of halichondrin B, an inspirational molecule obtained from a marine creature, goes back to the molecule's discovery in an ocean sponge in 1986.

Though it has been replicated in the laboratory several times before, new work by Rice University chemists could make halichondrin B and its naturally occurring or designed variations easier to synthesize.

Synthetic chemist K.C. Nicolaou and his lab reported in the Journal of the American Chemical Society their success in simplifying several processes used to make halichondrin B and its variations.

Halichondrin's molecular structure and potent antitumor properties inspired the design and synthesis of variations (aka analogues). The Rice lab's "reverse approach" to make halichondrin B resulted in the shortest route to what the researchers referred to as a "highly complex and important molecule."

"This total synthesis represents the shortest of the previously reported approaches to this complex natural product," Nicolaou said. "Its importance lies in its potential for further improvement and application to the rapid synthesis of other members of the halichondrin family as well as novel designed analogues as potential drug candidates."

He said the Rice lab's technologies can in principle be applied to the production of eribulin, a simpler and powerful halichondrin B analogue clinically used to treat breast cancer and liposarcoma.

Previous and current syntheses of halichondrin B and its analogues require initial bonding of carbon atoms, and then bonding of carbon and oxygen atoms, to construct cyclic ethers, key building blocks essential to making the molecules.

Nicolaou and his colleagues flipped the sequence to make the carbon-oxygen connections first. Known as the Nicholas etherification, this process was followed by radical cyclization to form the required carbon-carbon bonds, finally coupling them en route to the targeted halichondrin B.

Nicolaou noted other labs have "flipped" the process to synthesize various simpler compounds, but none had tried it on halichondrin B. "Its importance as a biologically active molecule coupled with its synthetically challenging structure served as our motivation to pursue this project," he said.

Their work reduced the number of steps required to make the molecule to 25, starting from commercially available materials. Nicolaou expects further simplification, will not only further reduce the steps of the synthesis, but also improve the overall yield, resulting in a more efficient and cost-effective chemical process for making this type of compounds.