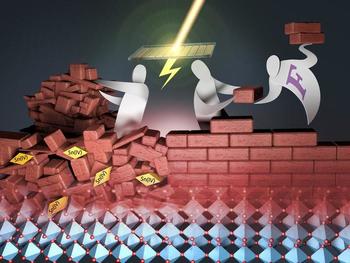 The addition of fluorine additives increases the quality of the perovskite layer. Analyses at BESSY II now show why.

Tin halide perovskites are currently considered the best alternative to lead-containing analogues, but are still significantly less efficient and stable compared to them. Now, a team led by Prof. Antonio Abate from HZB has analysed the chemical processes in the perovskite precursor solution and its fluoride chemistry in detail. Using a clever combination of measurement methods at BESSY II with nuclear magnetic resonance, they were able to show that fluoride prevents the oxidation of tin, which leads to a more homogeneous film formation with fewer defects and increases the quality of the semiconductor layer.

One of the most common strategies to obtain good quality tin-based perovskite films is to use stannous fluoride (SnF2) as an additive in the solution-based fabrication process. Many studies show that SnF2 improves the optoelectronic and morphological properties of perovskite films. However, why this additive has this effect has not been sufficiently elucidated so far.

Now, for the first time, a team led by Prof. Antonio Abate has elucidated the chemical role of SnF2 in the perovskite precursor solution that is responsible for these improvements. The key lies in the chemical properties of the fluoride anions. Tin readily oxidizes from Sn(II) to Sn(IV) and in this form creates defects in the semiconductor layer. Results of nuclear magnetic resonance analysis now showed that the fluoride anions from SnF2 have a strong affinity for Sn(IV) and form the compound SnF4. Using photoelectron spectroscopy at BESSY II, the team was able to demonstrate that SnF4 shows a lower tendency to be incorporated into the perovskite structure. This significantly reduces the Sn(IV) content in the thin film. Finally, small-angle X-ray scattering measurements at BESSY II showed that the fluoride positively influences the nucleation process in the precursor solution, thus improving crystallization.

These results come at the right time. Based on this study, it may be possible to find other additives with which the properties of lead-free perovskite solar cells can be further improved in a targeted manner.