How to find hidden treasures in chemistry with software 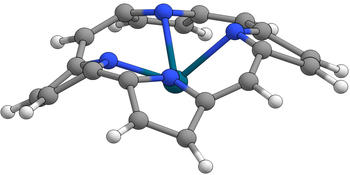 Haem proteins come in many varieties. They are true all-rounders and provide an extraordinary number of different functions in almost every area of living nature, especially in the biological energy balance. The centre in all these different proteins is always the same molecule. But how can a single compound perform so many functions? Jens Krumsieck and Professor Martin Bröring from the Institute of Inorganic and Analytical Chemistry (IAAC) at the Technische Universität Braunschweig have developed a method to find answers to this question. The results have just been published as a Very Important Paper in “Chemistry – A European Journal”.

The best-known example of haem proteins is haemoglobin, the oxygen transporter from the blood of mammals. Besides haemoglobin, there are many other well-known examples such as cytochrome c oxidase, which is the power plant in the mitochondrial membrane and supplies the organism with biological electricity and heat. Many people might also be familiar with cytochrome P450. It is used in our liver to break down xenobiotics and detoxify the body.

The active centre in all these different proteins, however, is always the same molecule: an iron complex of protoporphyrin IX, the so-called haem group. Haem is essentially an almost square and flat 2D molecule. Chemically, it belongs to the metalloporphyrins. There are many variations of the latter both in nature and in the laboratory, for example the magnesium-containing chlorophylls in green plants or the cobalt chlorin from vitamin B12.

For a long time, the question has been asked how a single compound can be able to perform so many different functions with such high selectivity and specificity. Jens Krumsieck and Martin Bröring have developed a digital tool for this purpose: “PorphyStruct” discovers special patterns in the structures of porphyrinoids.

These special patterns are so-called conformational modes. The adoption of these modes by porphyrinoids has recently been dubbed “molecular gymnastics” by Professor Mathias Senge from the Trinity College Dublin (Ireland). Porphyrinoids are indeed true athletes and anything but immobile. They can stretch and bend in a variety of ways – combined with the positive effects similar to our gymnastics. With this bending, the electrical and optical properties of the molecules change, sometimes drastically. This offers an explanation as to why the reactivity of the haem group in different protein pockets changes so strongly.

“PorphyStruct” is able to automatically detect, categorise and quantify these elongations for structures from a wide range of scientific fields. As a result, the programme provides a simple and easy-to-use way for chemists, biologists, engineers and materials scientists to quantitatively assess porphyrinoids in different environments.

“The project is pure fundamental research,” says Bröring. “But of course a digital tool can also always be used very quickly when it comes to uncovering hidden knowledge with relevance to application. For this reason, we have also consciously decided to make the source code completely freely accessible as open source.”

The insight that the “gymnastic” skills of porphyrinoids are an important component in understanding their reactivity is not new. However, a simple quantification method that spans most known systems and yields comparable analyses has not existed until now. The need for such a method was great. Individual cases have so far been analyzed manually for their bending patterns in extremely lengthy procedures. One of the referees puts this in a nutshell and writes in his expert opinion: “This is certainly a long-awaited tool in the porphyrin community.”

Professor Bröring adds: “Actually, the method and thus also a paper like this was far outside of the comfort zone for us preparative chemists. But the risk of looking at it from a completely new angle was worth it. There will be a lot of international attention in the field once the paper is out there.” The significance and expected resonance is also underlined by the classification of the Braunschweig paper as a “Very Important Paper” in “Chemistry”. In journals, particularly outstanding scientific contributions are classified VIP.

“And the research was not easy for us either,” Krumsieck notes. “Teaching the computer to recognize certain patterns in three-dimensional space turned out to be non-trivial. But our goal had to be that the operation is as simple and intuitive as possible.” To achieve this, certain structural motifs must be recognized automatically – especially in the mass of over 150 test structures, this was also a very time-consuming task.

Visual mind game on the cover of the Chemistry issue

On the cover of “Chemistry – A European Journal” is the illustration of a thought experiment: What if molecules were life-sized entities that could be examined directly with the naked eye in futuristic screening labs? Like a fitness trainer, one could check how well a molecule performs the ordered stretching exercises and thus evaluate its fitness status. In reality, of course, that doesn’t work. “That’s where we have to fall back on the available tools for examining submicroscopic quantum structures like molecules,” says Professor Bröring. “PorphyStruct” is now one of these tools.