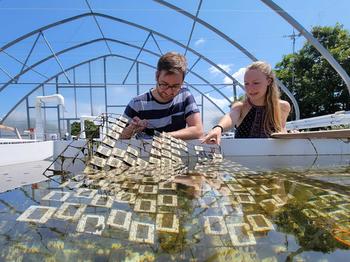 Sunlight was once thought to only fragment plastics in the marine environment into smaller particles that chemically resemble the original material and persist forever. However, scientists more recently have learned that sunlight also chemically transforms plastic into a suite of polymer-, dissolved-, and gas-phased products.

Now, a new study finds that this chemical reaction can produce tens of thousands of water-soluble compounds, or formulas. The breakdown into this many formulas, in a matter of weeks, is at least ten-fold more complex than previously understood.

“The growing evidence that photochemical transformation of plastics is an important transformation process in surface waters challenges a widely held assumption about the persistence of plastic in the environment,” according to the paper, Plastic formulation is an emerging control of its photochemical fate in the ocean, published in Environmental Science & Technology.

The scientific community, policymakers, industry, and others “assume that sunlight exposure merely physically fragments macroplastics to microplastics, which subsequently persist forever in the environment,” states the paper, whose lead author is Anna Walsh, a student in the Massachusetts Institute of Technology-Woods Hole Oceanographic Institution (WHOI) Joint Program in Chemical Oceanography. The new findings, along with those from the literature, “fundamentally challenge this guideline and indicate that sunlight not only aids physical fragmentation of plastic, it chemically alters it, producing a suite of transformation products that no longer resemble the parent material.”

“It’s astonishing to think that sunlight can break down plastic, which is essentially one compound that typically has some additives mixed in, into tens of thousands of compounds that dissolve in water,” says co-author Collin Ward, assistant scientist in WHOI’s Marine Chemistry and Geochemistry Department.

“We need to be thinking not only about the fate and impacts of the initial plastics that get leaked into the environment, but also about the transformation of those materials,” Ward notes. “We don’t really know yet what impacts these products might pose to aquatic ecosystems or to biogeochemical processes such as carbon cycling. While plastics breaking down more quickly than expected may seem like a good thing, it’s unclear how these chemicals may affect the environment.”

The study examined the breakdown under sunlight of four different single-use consumer polyethylene plastic bags from three major retailers that make a lot of plastic bags–Target, CVS, and Walmart–and compared them to pure polyethylene film. Most plastic, including these retailer bags, are not just a pure base resin, but rather they include a complex formulation of chemical additives to make the plastic behave or look a certain way. Up to about one-third of the mass of each of the retailers’ plastic bags was inorganic additives.

The organic compounds produced by sunlight were analyzed at the National High Magnetic Field Laboratory, which designed and developed a mass spectrometer equipped with a 21 tesla magnet that achieves the highest mass resolution and accuracy in the world. Essentially, the instrument is the world’s fanciest scale, allowing the scientist to determine the composition of the sunlight-produced formulas.

Many previous studies of marine plastics have generally used pure polymers, which are poor proxies for plastic in the marine environment. The paper calls for the research community “to embrace the diverse formulations and sunlight-driven transformations of plastics in the ocean” in order to gain a comprehensive and accurate understanding of the fate and impacts of marine plastic pollution.

“If the goal is to understand the fate and impacts of these materials, we need to study plastics that are representative of those that are actually leaked into the environment, as well as study the weathering processes acting on them,” says Ward.

“I am excited about this work because it provides actionable and attainable approaches for making less persistent plastics in the future,” says co-author Christopher Reddy, senior scientist in WHOI’s Marine Chemistry and Geochemistry Department. ““By simply modifying the ingredients in their recipes, the plastic industry can make their products more susceptible to breakdown once the product reaches its useful lifespan".

“There is a lot of room for academia and industry to collaborate on this problem,” adds Ward. “One logical way to solve the problem faster is to work with the people that develop the materials and understand their compositions. Ideally, we can figure out how plastic can be reformulated either to accelerate its degradation into products that are benign or to minimize the production of compounds that are not benign.”

An earlier paper by Ward, Reddy, and lead author Taylor Nelson, a postdoctoral investigator in WHOI’s Marine Chemistry and Geochemistry Department, shows that biofilms growing on plastic in the ocean screen light from reaching the plastic surface and may slow plastic degradation by sunlight. Like the paper led by Walsh, Nelson’s paper also showed that the composition of the plastic, including the presence of additives, influenced the extent of this effect.