Efficient catalyst for the light-driven methanation of CO2 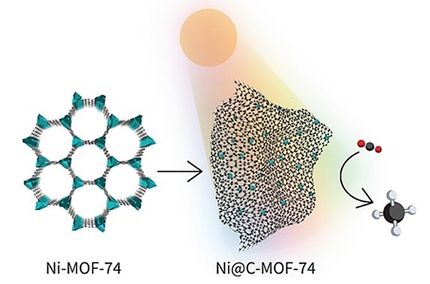 Recycling carbon dioxide (CO2), especially through conversion to methane (CH4), is compelling while anthropogenic CO2 emissions are still rising. A useful process for this transformation is photothermal methanation, in which CO2 and hydrogen are catalytically converted into CH4 and water upon irradiation with sunlight. In the journal Angewandte Chemie, a team of researchers has now reported the synthesis of a highly active, stable, nickel–carbon catalyst for this reaction.

The team led by Luis Garzón-Tovar and Jorge Gascon at King Abdullah University of Science and Technology (Thuwal, Saudi Arabia) was looking for an efficient, economical catalyst for the photothermal methanation of CO2. Photothermal catalysis is based on the combination of light-driven and thermal chemical processes. In contrast to pure photocatalysis, it has the advantage of allowing longer wavelength light in the visible and IR regions of the spectrum to contribute to driving the reaction.

Instead of precious metals, they sought to base the new catalyst on an abundant, inexpensive metal, and chose to use a high load of nickel nanoparticles on a carbon-based support. Carbon materials are highly promising supports for photothermal catalysis because they absorb a broad spectrum of light, are highly efficient in converting light into heat energy, and have a large surface area.

The team used a nickel-containing metal–organic framework (Ni-MOF-74) as their starting material for producing the catalyst. Controlled pyrolysis of this material at 600°C proved to be optimal. The Ni-MOF-74 decomposes to form uniform finely distributed nickel nanoparticles embedded in a porous graphitic carbon matrix. The resulting material, named Ni@C, demonstrated a high rate of conversion and high selectivity for methanation under artificial UV, visible, and IR light. In a continuous process in a flow-type reactor, the efficiency of the catalyst remained stable over a period of more than 12 hours.

To demonstrate the practical application of this system, an experiment was run outside, under natural sunlight, proving the potential of this new catalyst to reduce CO2 to CH4 using solar energy.