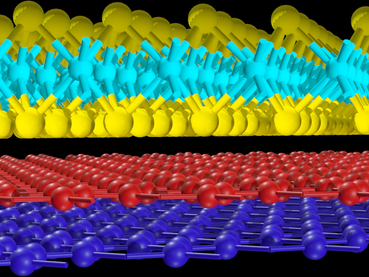 When layers of "magic-angle" graphene (bottom) come in contact with layers of certain transitions metals, it induces a phenomenon called spin-orbit coupling in the graphene layers. That phenomenon gives rise to surprising physics, including ferromagnetism.

When two sheets of the carbon nanomaterial graphene are stacked together at a particular angle with respect to each other, it gives rise to some fascinating physics. For instance, when this so-called “magic-angle graphene” is cooled to near absolute zero, it suddenly becomes a superconductor, meaning it conducts electricity with zero resistance.

“Magnetism and superconductivity are usually at opposite ends of the spectrum in condensed matter physics, and it’s rare for them to appear in the same material platform,” said Jia Li, an assistant professor of physics at Brown and senior author of the research. “Yet we’ve shown that we can create magnetism in a system that originally hosts superconductivity. This gives us a new way to study the interplay between superconductivity and magnetism, and provides exciting new possibilities for quantum science research.”

Magic-angle graphene has caused quite a stir in physics in recent years. Graphene is a two-dimensional material made of carbon atoms arranged in a honeycomb-like pattern. Single sheets of graphene are interesting on their own — displaying remarkable material strength and extremely efficient electrical conductance. But things get even more interesting when graphene sheets are stacked. Electrons begin to interact not only with other electrons within a graphene sheet, but also with those in the adjacent sheet. Changing the angle of the sheets with respect to each other changes those interactions, giving rise to interesting quantum phenomena like superconductivity.

This new research adds a new wrinkle — spin-orbit coupling — to this already interesting system. Spin-orbit coupling is a state of electron behavior in certain materials in which each electron’s spin — its tiny magnetic moment that points either up or down — becomes linked to its orbit around the atomic nucleus.

“We know that spin-orbit coupling gives rise to a wide range of interesting quantum phenomena, but it’s not normally present in magic-angle graphene,” said Jiang-Xiazi Lin, a postdoctoral researcher at Brown and the study’s lead author. “We wanted to introduce spin-orbit coupling, and then see what effect it had on the system.”

To do that, Li and his team interfaced magic-angle graphene with a block of tungsten diselenide, a material that has strong spin-orbit coupling. Aligning the stack precisely induces spin-orbit coupling in the graphene. From there, the team probed the system with external electrical currents and magnetic fields.

The experiments showed that an electric current flowing in one direction across the material in the presence of an external magnetic field produces a voltage in the direction perpendicular to the current. That voltage, known as the Hall effect, is the tell-tale signature of an intrinsic magnetic field in the material.

“The unique influence of spin-orbit coupling gives scientists a new experimental knob to turn in the effort to understand the behavior of magic-angle graphene,” said Erin Morrissette, a Brown graduate student who performed some of the experimental work. "The findings also have the potential for new device applications.”

One possible application is in computer memory. The team found that the magnetic properties of magic-angle graphene can be controlled with both external magnetic fields and electric fields. That would make this two-dimensional system an ideal candidate for a magnetic memory device with flexible read/write options.

“We are working on using the atomic interface to stabilize superconductivity and ferromagnetism at the same time,” Li said. “The coexistence of these two phenomena is rare in physics, and it will certainly unlock more excitement”