Reference-factory.H2 – electrolyzer and fuel cell production of the future 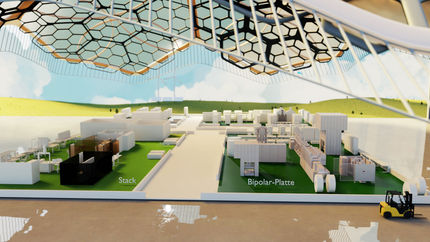 Reference-factory.H2 is a production system based on physical and virtual components.

Hydrogen is a key element in the energy transition. To ensure that hydrogen can become generally established as an energy source, it must be produced at market prices, in sufficient quantities and in a climate-neutral manner, and used with a high CO2 reduction rate. This requires affordable, robust hydrogen systems in the form of electrolyzers and fuel cells. With the intent of launching their serial production in the future, Reference-factory.H2 provides both a design for guidance and a modular system based on new and specifically optimized technologies. This shall contribute to the economically viable production of electrolyzers and fuel cells, accelerate their market breakthrough and massively reduce the cost of hydrogen. Reference-factory.H2 will be presented for the first time at the joint Fraunhofer booth at the Hannover Messe 2022 from May 30 to June 2.

In order to achieve the goals of the Paris Agreement, countries must largely stop using oil, gas and coal, switching instead to renewable energy sources. Here, hydrogen is a key element as an energy source when it comes to storage and widespread distribution. However, the benefits of hydrogen go even further. It provides the unique opportunity to combine energy supply, climate protection and value creation. It plays a key role in reducing CO2 emissions, while offering a sustainable and future-proof field of business for Germany as a production location.

Electrolyzers are required for the climate-neutral production of hydrogen. They are used to split water into hydrogen and oxygen with electricity generated from wind or solar power. The resulting green hydrogen can be used in various ways. It can either be further processed in the process industry as a sustainable raw material or converted back into electricity using fuel cells. However, to date both electrolyzers and fuel cells have been produced in small quantities and at high cost, with little automation involved. Reference-factory.H2 offers the potential for science and industry to catapult the production of hydrogen systems into a new era of efficient industrial mass production.

To ensure the successful outcome of this action, existing production technologies must be analyzed and evaluated in terms of their use for high-quality serial production of electrolyzers and fuel cells. New continuous processes and systems are also required to pave the way toward mass production. This is the only way to substantially reduce the production effort and to ultimately put hydrogen on an equal cost footing with fossil energy sources.

In the current period of high technological variability, when market uptake for electrolyzers is in its early stages and the uptake for fuel cells is targeted for the 2030s, German industry needs a technical production focus. This is the only reasonable way for companies to invest in this field of business at an early stage in order to make it sustainable and to position themselves successfully in the face of international competition in the long term. To ensure and support this focus, Reference Factory.H2 was designed for the flexible, dynamically adaptable, quantity-scalable serial production of hydrogen systems. The concept is unique because of the direct opportunities for industrial involvement. Companies can be both users of the services and partners of Reference-factory.H2.

Reference-factory.H2 is a production system based on physical and virtual components. It is used to create a reference design and new technology solutions, while existing ones are optimized. At the same time, digital twins of the production elements are developed and incorporated in a virtual architecture. This creates a modular system of technologies that are compared with each other and flexibly combined in process chains. “Reference-factory.H2 allows us to use regional expertise and infrastructures better so that industry can be more closely involved in development. This accelerates the transfer of the solutions to industry,” says Dr. Ulrike Beyer, Head of the Hydrogen Task Force at Fraunhofer IWU and coordinator of the project. “We’re basically building a B2B platform in which we merge the core areas of expertise of the Fraunhofer Institutes and the partners involved to create a highly effective value chain for hydrogen systems, thus providing potential stakeholders with a holistic overview of the economic opportunities,” says Beyer. The virtual images offer the research teams the chance to simulate the networking of new production processes and systems, and to check and compare them in detail on the computer, thus selecting the appropriate materials, tools and systems for achieving effective production. As a result, overall relationships can be clearly displayed right up to complete process chains, and it is possible to evaluate the cost incurred in the production of hydrogen systems.

Plans exist for offering services and specific forms of involvement to German industry starting in the third quarter of this year. The common objective will be to develop production technologies and systems conducive to the serial production of fuel cells and electrolyzers, which will substantially support market uptake from 2025.

“The stack is at the core of the hydrogen systems and also is the place where the water is split and electricity generated,” explains Beyer. This stack consists of several hundred stacked interconnected individual cells in which the chemical energy conversion takes place. Due to its multiple repeating elements, it makes sense to shift the production of the stack to industrial production involving large quantities, thus substantially reducing cost.

The reference-factory includes machines and systems for producing the key stack components: the bipolar plate (BPP) and membrane electrode assembly (MEA). “The new concept makes it possible to locally carry out the necessary technology developments locally on site, so that a forming press can be available for BPPs in Chemnitz and a production plant for the MEA in Aachen. Their digital twins are brought together centrally in a common architecture, where they are used for process comparisons and evaluations, or for considerations regarding process chains,” explains Beyer. The aim is to develop a modular system of technologies whose individual components can be evaluated technologically and economically. This system intends to reduce the investment risk and support companies in the development of their hydrogen field of business.

Details about the Reference-factory.H2 concept, the range of services and the opportunity to become involved will be available to interested visitors at the Hannover Messe 2022 at the joint Fraunhofer booth (Hall 5, Booth A06). In addition to providing information on the relevant areas of expertise, infrastructures, technologies and projects, Reference-factory.H2 will also offer an action area for experiencing a wide range of interactions.