Success comes in many forms 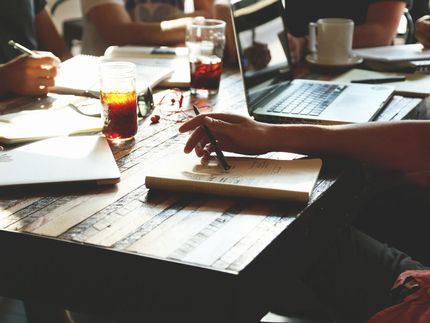 New research from the University of Washington shows that early investors often predict the future of startup companies (symbolic image).

For a movie, it could be box office numbers or critical acclaim. In academia, maybe it’s publishing research or helping students land dream jobs after graduation. New research from the University of Washington shows there are also multiple ways for startup companies to be successful. Early investors often predict which route they will take.

“In the entrepreneurship world, we hear a lot about ‘exits’ for firms because that’s when the founders and investors make money,” said co-author Emily Cox Pahnke, an associate professor of management and organization at the University of Washington Foster School of Business.

“In most industries, both acquisitions and initial public offerings, or IPOs, are great exits. But what it takes to get to them is different. Our research shows that different patterns of collaboration between venture capitalists lead to different types of exits for the firms they invest in.”

When a venture capital firm, or VC, invests in a startup, it often does so with other VCs as part of a syndicate. VC syndicates share knowledge and resources as they work to guide their startup toward a successful exit strategy — either an acquisition or an IPO.

The study, recently published in the Academy of Management Journal, found that firms whose  VCs invested with other VCs they had worked with in the past were more likely to exit through acquisition.

Acquisitions can be a form of fast exit where a venture is sold to a larger one. By contrast, less prior collaboration among VCs in a syndicate leads to the increased likelihood of a venture going public. Surprisingly, researchers found the same patterns of collaboration that increase the odds of an IPO also increase the likelihood that a firm will go bankrupt.

Using Crunchbase, a database of startups and investors, the authors looked at U.S.-based startup companies that were backed by VCs. They found that prior collaboration between venture capitalists could help predict a startup’s future outcome.

The researchers analyzed the initial funding and outcomes of more than 11,000 ventures that launched between 1982 and 2014. They supplemented the Crunchbase data with hand-collected outside sources, identifying 71,624 rounds of funding involving and 20,142 investors.

In the paper, the authors offered two examples to illustrate how prior collaboration affects exit type. Gridiron Systems and Carbonite were both VC-backed companies that provided digital data storage. Gridiron’s VCs had co-invested in at least two prior companies. Conversely, none of Carbonite’s VCs had previously co-invested. Gridiron Services was acquired in 2013 and continues to specialize in storage technology. Carbonite went public in 2011 and has now extended its services to other markets.

In an acquisition, a startup is purchased outright by another company that assumes a controlling ownership stake. While the shares of the founders and investors become fully liquid, control of the company is also handed over.

“To help with an acquisition, investors need industry specific knowledge,” Pahnke said. “They need to be able to agree on certain outcomes more quickly and move faster. Finding a good suitable acquirer requires industry ties. If you’ve worked with a set of investors in the past, you’re far less likely to have conflict that slows you down, and you’re far more likely to agree on your desired outcomes and have those industry ties.”

In an IPO, a venture’s shares are offered for sale to the broad market of stock investors. The management team often remains in place, and founders and investors typically obtain partial liquidity.

“When you don’t know each other, when you haven’t worked together, you’re far more likely to have conflict that slows you down,” Pahnke said. “You’re also more likely to consider a much broader variety of information and alternatives. Although it takes longer, you’re likely to get those kinds of complex outcomes, like an IPO, where you don’t need to appeal to a specific buyer.”

“With acquisitions, founders typically only remain with the acquiring company for for a limited amount of time,” Pahnke said. “Founders can move on and do something else. With an IPO, the management team is likely to stick around for a while.”

Pahnke said she hopes this paper will help broaden the definition of success.

“There are tradeoffs between working with people you know and people you don’t that lead to different kinds of successes,” she said. “It’s not that one is bad or good. They’re just qualitatively and quantitatively different.

“As researchers, we provide unexpected insights that are only visible when you map a large set of collaborations over time. For both entrepreneurs and investors our research suggests thinking carefully about who you work with — and who they have worked with in the past — may help you achieve different kinds of successes.”