The battery-like devices can quickly provide large, short bursts of energy and they are free of toxic materials 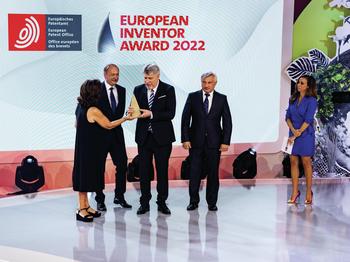 Jaan Leis, Mati Arulepp and Anti Perkson (Estonia), winners of the European Inventor Award 2022 in the Industry category, at the hybrid award ceremony on 21 June 2022.

The European Patent Office (EPO) distinguished Estonian researchers Jaan Leis, Mati Arulepp and Anti Perkson with the European Inventor Award 2022 in the "Industry" category. The Estonian invention significantly improves the efficiency of battery-like devices known as supercapacitors or ultracapacitors, which store energy as static electricity and can charge and recharge in a matter of seconds. This technology has quickly attracted attention from the transport and electricity grid industries.

"Technological innovations are signalling a way forward in the global transition to a greener economy. I am delighted to recognise today the achievements of Jaan Leis, Mati Arulepp and Anti Perkson whose inventions are helping industries reduce their dependence on fossil fuels and take a crucial step forward in the fight against climate change," says António Campinos, President of the European Patent Office.

The Estonian team were honoured at the European Inventor Award 2022 ceremony, a hybrid event watched online by a worldwide audience. The Award is one of Europe's most prestigious innovation prizes and is presented annually to outstanding inventors from Europe and beyond who have made an exceptional contribution to society, technological progress and economic growth.

To improve both the power and energy density of supercapacitors, Leis, Arulepp and Perkson optimised the properties of a material called curved graphene, a single layer of carbon atoms that take a form similar to a crumpled up piece of paper which gives it a higher surface area on the electrode and so a higher density to transmit power. The result is a so-called ultracapacitor that can charge within 15 seconds and withstand over one million charge cycles, according to the company. With a high chemical purity, it is free of the toxic materials commonly found in other battery/capacitor technology, such as lithium or cobalt. According to Skeleton Technologies, the company founded by Leis, Perkson and colleagues, this ensures reliability and limits their environmental impact.

Supercapacitors are well suited to applications that require large, short bursts of power such as load-lifting in cranes. In 2018, Skeleton Technologies began testing ultracapacitor-powered trams in three German cities (Mannheim, Heidelberg and Ludwigshafen). By capturing braking power and reusing it for acceleration, the ultracapacitors resulted in electrical energy saving of up to 30%, according to the company.

The inventors say that these real-world applications drive their research. "We always have had this idea when we develop something in the lab; it has to have real value," said Jaan Leis. "This is a big difference from scientific articles - you always find something new, but is it applicable to real life?"