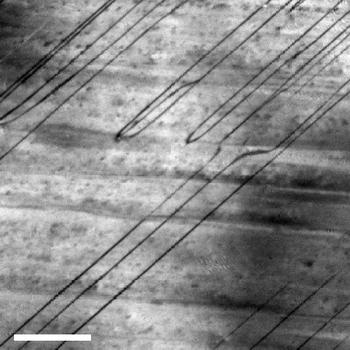 Electron microscopic image of an antiferroelectric crystal, with the dark, prominent diagonal lines marking the boundaries. The bar at the bottom left indicates a length of 200 nanometers. 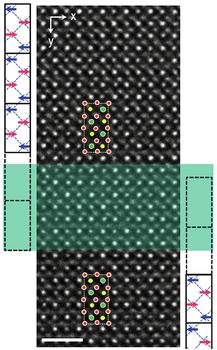 Atomic resolution electron microscopic image, with a boundary marked horizontally in cyan. The coloured circles illustrate the constituent parts of the crystal; lead (yellow), zirconium (green) and oxygen (red). The arrows show the polarization, which is neutralized outside the boundaries. The white bar indicates a length of one nanometer.

Storing more and more in an ever-smaller space – what sounds impossible is in fact just part of the daily routine in information technology, where for decades, increasing amounts of data have been successfully stored on media with ever higher densities. An international team, including researchers from Forschungszentrum Jülich, has now discovered a physical phenomenon that could prove suitable for use in further data aggregation. They found that domain walls, which separate areas in certain crystalline materials, display a polarization, potentially allowing information to be stored in the tiniest of spaces, thus saving energy. The results of this study have been published in the journal Nature Communications.

Scientists from Forschungszentrum Jülich, Swiss Federal Institute of Technology Lausanne (EPFL), University of Silesia in Katowice, Poland, and Xi'an Jiaotong University in China, have investigated so-called antiferroelectric crystals with the help of the most advanced electron microscopes and computer simulations. These materials possess no electrical polarization and for this reason, seemed up until recently to be of no interest for such applications. The researchers have now discovered that certain areas within these materials do indeed exhibit ferroelectric polar properties.

Ferroelectricity is generated when displacements of positive and negative ions result in the formation of electrical dipoles. The magnitude and orientation of these dipoles, also known as polarization, can be altered using an external electric field and is able to maintain itself without any additional current until it is overwritten. Ferroelectric materials are for this reason already used, for example, to store data on train tickets.

The ferroelectric areas that the researchers have discovered are only around two nanometers thick and could therefore one day be used to store data in a tenth of the space that magnetic materials use. They form the boundaries between identically-structured areas of the otherwise antiferroelectric materials.

"We can imagine these materials as being like three-dimensional patchwork objects made from regularly-arranged building blocks, which are the domains", explains Dr. Xiankui Wei, visiting scientist at the Peter Grünberg Institute and post-doctoral researcher at EPFL. "Within each individual building block, the polarization is absent due to cancellation of oppositely arranged electric dipoles in the basic structure unit. However, the boundaries or 'walls' between domains are polar."

Investigations using atomic resolution electron microscopy, with the help of a technique developed at Forschungszentrum Jülich showed that each wall is uniformly polarized. To change the polarization and write the data, the only requirement is a voltage pulse, as the polarization is then stored until overwritten. As no current is necessary, this uses less energy than magnetic data storage does.

"What is especially exciting in terms of applications is the special arrangement of the walls", reports Prof. Nava Setter of EPFL; under the microscope it is possible to see at relatively low magnification, that the domains are separated from each other by long, parallel walls. The position of the strain-free walls is variable – upon application of an inhomogeneous electric field, they move either closer together or further apart. The researchers intend to investigate these phenomena in more detail, as the ability to accurately control the mobility and density of the walls are important requirements in terms of technical applications.