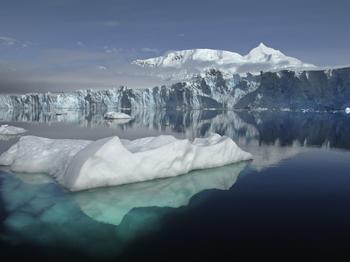 Researchers from Lawrence Livermore National Laboratory (LLNL) assisted a team from the University of Melbourne in discovering how methylmercury enters the Antarctic sea and bioaccumulates in the marine food web.

Thelen explained: "We examined the sequence data obtained from DNA samples collected in sea ice and other Southern ocean environments. A candidate sequence for a mercury methylation enzyme was found in a bacterial strain of the genus Nitrospina. Then Adam used computational tools he developed at the Lab to predict the structure and show in an elegant model how the active site of the enzyme would react with mercury."

Mercury (Hg) created from volcanoes and human activity such as burning fossil fuels circulates in the atmosphere then deposits onto sea ice. The marine nitrite-oxidizing bacterium Nitrospina, may convert Hg to methylmercury (MeHg), which is released into the Southern Ocean, where it enters the marine food web. Scientists are concerned that MeHg stored in the fatty tissues of fish would contain more mercury than humans can handle and could be a public health concern in the future.

"Further research could physically confirm the proteins responsible for Hg methylation in Nitrospina, and perhaps could help us find a way to inhibit or to reverse the reaction to reduce methylmercury poisoning," Thelen said.

Samples were collected from snow, sea ice, brine and surface sea water across five pack-ice stations during the second Sea Ice Physics and Ecosystem eXperiment (SIPEX). Those taken from various depths of sea water under seasonal ice cover showed Hg concentrations significantly higher than those taken from open water. These ice-covered sea water Hg concentrations increased southward. The study proposes that ocean bacteria may convert Hg to MeHg, and supports this with the identification of bacterial enzymes required for this reaction.