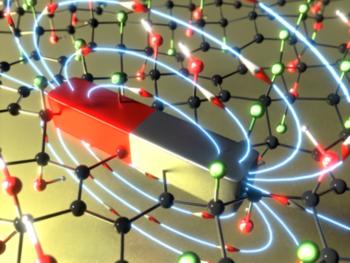 A dream of many generations of researchers has been fulfilled by a discovery made by scientists at the Regional Centre of Advanced Technologies and Materials (RCPTM) at the Palacky University in Olomouc. By using graphene, an ultrathin form of carbon, these scientists prepared the first non-metallic magnet that retains its magnetic properties up to room temperature. In doing so, they disproved the old belief that all materials with room temperature magnetism are based on metals or their compounds. Chemically modified magnetic graphene has a vast range of potential applications, particularly in the fields of biomedicine and electronics.

"For several years, we have suspected that the path to magnetic carbon could involve graphene - a single two-dimensional layer of carbon atoms. Amazingly, by treating it with other non-metallic elements such as fluorine, hydrogen, and oxygen, we were able to create a new source of magnetic moments that communicate with each other even at room temperature. This discovery is seen as a huge advancement in the capabilities of organic magnets," says Radek Zbořil, a leading author of the project and director of RCPTM.

The idea and study arose solely from the work of the Olomouc scientists, who also developed a theoretical model to explain the origin of magnetism in these carbon materials. "In metallic systems, magnetic phenomena result from the behavior of electrons in the atomic structure of metals. In the organic magnets that we have developed, the magnetic features emerge from the behavior of non-metallic chemical radicals that carry free electrons," says Michal Otyepka, a co-creator of the theoretical model whose work on the project was conducted within the framework of a prestigious European Research Council (ERC) grant. "I am pleased that the very first work on the topics addressed by the ERC project has yielded such important results," he adds.

The path from this discovery to practical applications may be relatively long. However, the range of potential uses is enormous. "I think that not only our team in Olomouc but also the broad scientific community will want to exploit the huge surface area of graphene and the potential of combining its unique conductivity and electronic properties with magnetism. Such magnetic graphene-based materials have potential applications in the fields of spintronics and electronics, but also in medicine for targeted drug delivery and for separating molecules using external magnetic fields," says Jiri Tucek, whose work focuses on solid-state magnetism. The Czech scientists are already collaborating with colleagues from Japan and Belgium to look at applications of organic magnets and to develop accurate theoretical models describing the unique magnetic properties of these new materials.

In addition to carbon-based magnets, the Olomouc research team recently reported the discovery of the world's smallest metal magnets, also in Nature Communications. According to Professor Zbořil, this will certainly not be the team's final contribution to research on magnetism. "We have taken several important steps towards developing the first magnetic molecules whose magnetism can be manipulated at room temperature. Recent experiments in our labs have clearly confirmed the possibility of creating such molecules, and we are currently collaborating with the group of Professor Pavel Hobza to develop detailed theoretical explanations for the unique behavior of these molecular magnets. I aim to be, for the third time, faster than competing research teams around the world, especially given the potentially immense impact of organic magnetic materials in fields such as molecular electronics and sensing," says Zbořil.